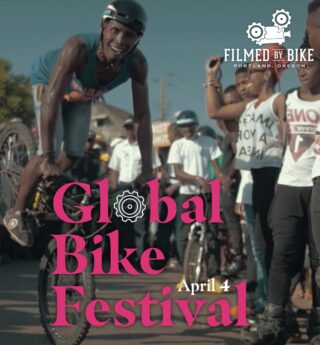 “When shit goes down, bikes rise up.”

That’s the rally cry from Ayleen Crotty, one of Portland’s most dedicated and prolific purveyors of bike culture. Crotty’s Filmed by Bike started as a local event but has grown significantly in the past 18 years and now includes tour stops nationwide and an impressive list of submissions from around the world.

Originally scheduled for May 15-17th at the Hollywood Theater, the coronavirus pandemic has forced Crotty to postpone the event until September. But the world needs bike films now more than ever, so Crotty announced today she’ll host the Global Bike Festival on April 4th.

“I’m doing what I know how to do best in times of adversity,” she shared with me today. “Digging in on a new project, challenging myself to the max, and innovating. Here we go!”

The fest will take place via YouTube and will feature most of the trimmings FBB fans are used to: A live performance, a special selection of films, and a filmmaker chat session. Admission to the show is just $12 and will be shared with the artists.

Noted bike-riding musician Ben Weaver (of Music for Free on the Great Divide MTB Route fame) will perform live and filmmaker Manny Marquez will join a virtual hangout open to all fest-goers.

Get tickets and learn more at the official event website.

Ayleen can do anything.

Thanks FBB. I’m always in!

FBB is one of my favorite events in Portland. Sorry to see that it won’t be live, but I’m stoked to do this online!