PBOT now has a manual for creating safer work zones 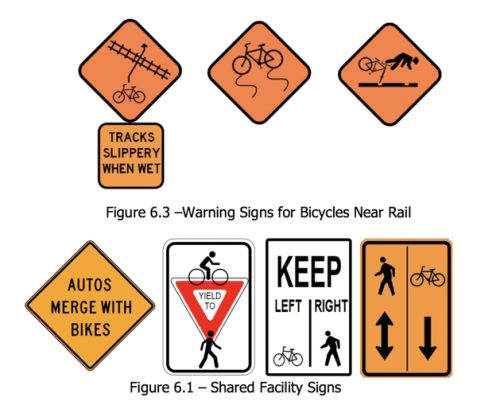 Signage examples from the manual.

The Portland Bureau of Transportation has published its first-ever manual for temporary traffic control designs. Wonky words aside, this new guide is an important tool that could lead to safer cycling (and walking and driving) through work zones.

The guide has been endorsed by Portland’s City Traffic Engineer Lewis Wardrip and is aimed at designers, engineers, utility and maintenance workers, and even astute tactical urbanists (wink wink). Chapters include comprehensive lists of pertinent laws and city code/permitting requirements, recommended devices and products to get the job done, and how to train flaggers and traffic control measures. There are also of examples of safe work zones across a variety of roadway types and conditions — from one-way streets to bike lanes.

Section 6.6 of the guide (starts on page 50) is devoted to “Bicycle Accomodations”. The over-arching rule described in the manual is essentially “do no harm.” “When an existing bicycle lane or path is disrupted or closed,” it states, “a temporary bicycle facility should include the features and characteristics present in the existing facility.”

Here’s an excerpt from that section:

Temporary bicycle facilities may be given priority over parking and vehicle lanes on a multilane road, as determined by the Traffic Engineer. Bicycles should be separated from automobile traffic whenever possible. In situations where it is not feasible to provide an exclusive bicycle facility, bicycles should be directed to either a shared path (such as a sidewalk) before being directed to share a travel lane with automobile traffic.

The method for providing safe accommodations for cyclists should be prioritized as follows:

Minimum lane widths for bicycle and multi-use facilities are listed in the General Requirements chapter under Lane Requirements [Bicycle lanes should be maintained to four feet minimum. Multi-use pedestrian/bicycle lanes should be maintained to a minimum unobstructed width of eight feet, and a minimum vertical clearance of eight feet.]. When there is insufficient roadway width to maintain a separate bicycle and automobile lanes, mitigations should be made with relevant traffic control measures, e.g. advisory speed zone, advance warning signage, bike route detours, or auto detours. Give proper notice to bicycles, pedestrians, and vehicles regarding a change in use to a shared route.

People riding bikes will frequently ride behind a line of channelizing devices, such as cones, when they do not perceive a hazard, even if it is not safe to ride in the work space. To prevent cyclists from entering the work space, place “Bicycles KEEP LEFT (RIGHT)” signs, as shown in Figure 6.2, along the work space following access points and at regular intervals throughout a longer work zone as a reminder bicycle traffic. Caution tape may also be used to prevent bicycles from encroaching into the work space by, stretching it tightly between the tops of closely-spaced tubular markers.

And here’s the guidance for “Bike Facilities on Streets with Tracks”:

Bikes cannot be shifted onto lanes with rail tracks. When shifting or merging traffic into a lane with tracks, plan an alternate route for bikes that is smooth and free of tracks or other obstructions which may be hazardous to bicycles.

Bike routes should cross tracks at an angle between 90 and 60 degrees. Bicycles must be able to cross tracks fully upright and not leaning, thus, do not cross cyclists over tracks within a curve. When bike lanes will be transitioned across tracks, advance warning signs should be used to alert people on bikes of the hazard. Some examples of such signs are shown below.

In addition to (hopefully) encouraging work crews and engineers design better work zones, this new manual is a great addition to the advocates’ toolbox. It’s something we can use to hold PBOT accountable when sharing concerns we see on the street. You can download the manual here (PDF)

We will need actual enforcement of this for it to actually help. Good signage won’t make up for the fact that a construction plan isn’t being adhered to and is causing conflict. A plan can call for wonderful signage and replacement lanes with the actual result being a two foot wide bike lane without any opportunity to take the lane.

Also not sure I agree with the prioritization table they have, I’d flip D and E, sharing space with peds isn’t fun for everyone and that shared space is usually a sidewalk (not the 8 foot wide space they outline) which is not near enough room unless the work is happening in an area where there are very few bikes and peds.

A quick look through the manual doesn’t turn up anything preventing these signs from blocking the bike lane. That is disappointing and not at all surprising. Also the section on temporary curb ramps fails to address the fact that they are generally placed in bicycle lanes and the lane should also be adjusted, at the expense to auto lanes, if necessary, to compensate.

This is all to say I am having trouble seeing how this update would prevent any of the dangerous conditions I have ridden through in the past. The signage will be nicer.

Well the first step to recovery is admitting you have a problem right?

Now lets see how these suggestions are embraced or enforced.

In the past, Portland was eager to attract and encourage development. Living though these boom years, I think the city needs a wholesale reevaluation of how easy they allow development staging on public ROW. So many of these projects create problems for others for months while benefiting a few wealthy developers and future tenants who can afford to move in.

A great example of this is the Eastside Burnside bridgehead. We (the public) have endured years of problems as a result of some greedy private developers constructing ugly and overpriced real estate. And it’s not just cars and bikes, busses too sit though hours of traffic due to lane closures, stop relocation, narrow lanes, temporary detours; all externalized costs to the public for the benefit of a few.

Did you mention ugly? Oh I see you did!

I see no mention of “construction ahead” warning signs placed in bike lanes prior to a project. These are typically left for days, weeks, or months, and force cyclists into the vehicle lane, even if no construction or closures are actually taking place.

Yeah, I pack those up and put them in the grass nearby. There are a pair on SE 28th that habitually are laid down such that the bicycle lane is 60% blocked by long metal spikes, aka their feet. It takes about 30 seconds to dismantle one once you find the flip switches/lock pins.

This is great news – on the face of it. (It was overly difficult to speak to various CoP sections about safer long term work zone planning 2 years ago when we + BTA approached them then.) Thanks Carl for starting this process.

I will take a look at these materials and see if the details and deficencies were successfully addressed.

Thank you, Carl, for helping make this happen.

Since contractors violating these guidelines would be creating an unsafe situation for people as a result of the the work they are doing we should institute Osha style enforcement and fines. For instance the fine for putting a worker in a deep trench that is improperly shored up is $100,000. Contractors take notice of this and almost never try to endanger their employees by cheating on trench work. Make the fines similar for endangering vulnerable road users and I guarantee things will improve.

Your last sign suggests that the left portion is for pedestrians going in both directions and the right portion is for bicycles going …….backward? Where does a cyclist wanting to go forward travel? Also your YIELD sign looks great! So why does the KEEP Right and Left signs have the pedestrian walking left? Mixed messages.

Of course there are options for dumping cyclists in with pedestrians, creating a substandardly narrow temporary bike lane or even diverting cyclists onto some detour. That’s exactly what we should expect from a city that has designated cars as the number one transportation priority. Oops, I forgot that Portland put pedestrians and cyclists over transit and all of them over cars.

Perhaps there is some miscommunication going on here and PBoT meant to recommend detouring cars to alternative routes. After all, literally every street is car friendly, so it shouldn’t have any impact on Vision Zero to detour the cars. Oh, my bad, I forgot that Vision Zero is another example of virtue signaling that isn’t meant to be understood as serious.

Nice to see more good work come out of the efforts of the #workzoneWTF campaign. Thanks PBOT!