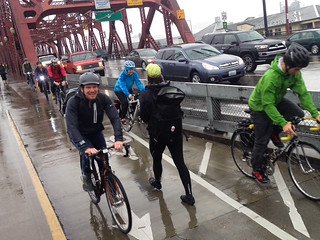 A rainy day for the commute challenge in September 2014.
(Photos: J.Maus/BikePortland)

The Bicycle Transportation Alliance’s popular and friendly competition among Oregon and Southwest Washington workplaces is shifting to springtime and making some big changes.

It’s now called the “Bike More Challenge” and it starts next month instead of in September.

Other big changes for 2016: The BTA now invites participants to log all bike trips, not just work commutes; the entire contest runs on a new software platform, and you can get extra points for encouraging someone else to sign up.

“You can log your ride to the grocery store, your recreational ride, whatever,” BTA spokeswoman Sarah Newsum said Thursday. “Sometimes the bike commute is a big leap for some people, having to show up for work after biking.” Moving to May also puts the newly renamed Bike More Challenge in line with National Bike Month, which in many cities includes an organized Bike to Work Week.

The change comes after 10 years of the BTA’s Bike Commute Challenge. Largely funded by regional government Metro, the annual Challenge is one of the most visible events of the year for the Portland-based statewide advocacy group. But it’s seen the number of participants slip 11 percent since 2011.

The new system, which scraps the BTA’s custom-built software in favor of a package provided by the New Zealand-based website LoveToRide.net, will make it much easier to log trips. If you already log bike trips with any of four apps — Strava, Moves, MapMyRide, and Endomondo — you can register your account with the site and they’ll be automatically entered into the database. (Unfortunately, the Portland-based Ride Report and RideWithGPS apps aren’t supported yet.)

Instead of ranking local workplaces by percentage of commutes, workplaces will be scored with an entirely new point system customized by the BTA: “You actually get a lot of points for encouraging new riders to join,” Newsum observed. “If I join and I’m like “Michael Andersen told me to join” — it prompts me to put your name in — you actually get points.”

That seems appropriate for a challenge intended to introduce more people to the basics of bike transportation. (I say this every year: the commute challenge is what got me to make the jump to bike commuting, back in 2011.) 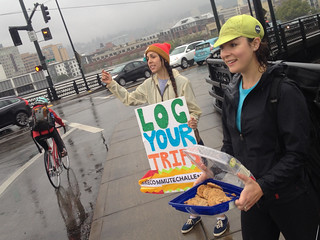 May in Portland tends to be rainier than September — the average May has 14 days with some rain, compared to seven days in the average September — but it also signifies the start of warm-weather season rather than the end of it.

“It’s nice to get people in the habit of biking going into the nicer weather,” Newsom said. “It’ll hopefully sort of solidify that habit a little bit more.”

Also no syncing with our local https://ridewithgps.com/ ??

Nope. Should have mentioned that in the story too, I’ll add.

This is a great idea. We tend to focus way too much on commute trips when it comes to mode split and forget about all other types of trips. It’s also great for people like me who live too close to work to really justify cycling rather than walking, or who are unemployed, work from home, or just don’t feel ready to cycle to work, but could see themselves start cycling to the grocery store. I’m excited that we all get a chance to participate this year!

As someone who is self-employed and works from home, I can personally get into the “Bike More Challenge”. Much more so than a “Bike to Work Week”.

Though I loved the “Bike to Work Week”s of the 1990s — much more pointed than what they evolved into — “Bike Month” “Alt Trans Month?” or whatever. Biking to work for a week is an identifiable, achievable challenge, and sets a person up for doing it long-term with little initial commitment required. “Bike More” doesn’t necessarily present a strong enough challenge to enable someone to become a bike commuter through a single committment.

I’ve participated in these challenges the past few years, and my first time the challenge was a big motivator to keep biking into September. I became a year-round bike commuter with this encouragement.

The past year or two, however, I’ve only done it because it felt like a community obligation, and the rules have been a bit frustrating. For example, they wanted us to invite new commuters, but then you can only “win” when you have a really high commute rate for everyone on your team.

So, it looks like this new set-up addresses those contradictions! And it makes it a lot more fun and interesting than simply biking to work.

I’ve never done any of these challenges before. I used to ride daily, but due to getting a transit pass and also due to being assaulted while riding too many times, I haven’t done a commute ride for months and months. I’m going to ride again soon. However, I really wish my route was more peaceful and less full of extremely aggressive drivers.

I never sign up for these things. I don’t know that they do any harm and they may well do some good, but to me they seem more tribal than inclusive.

Should I sign up my three-person business? Sure, we all ride every single day and I’ll be hitting the road for nearly 2000 cycling miles in May, which will skew the points a wee bit.

How does reporting all that help me encourage other people to get on their bikes? I must be missing something here.

I’m not sure that I understand the comment about potential harm, and it sounds like you’ve answered your own question about whether to participate. I work at a decent-sized organization (100 or so people). Prior to our participating, we probably had 7 or 8 year ’round bike commuters. We’ve run the Bike Commute Challenge up the flagpole the last few years, including doing simple things like buying donuts each Friday for participants, getting a handful of local restaurants to donate gift certificate to use as prizes in a random drawing, and bringing in bike mechanics to teach folks basic maintenance. Making a bigger deal out of it has turned a handful of fellow employees into warm weather commuters, and an additional 2 or 3 folks into year ’round commuters. The real impact of the Bike Commute Challenge, in my mind, is when workplaces embrace it like this and convert folks into bike commuters.

That sounds encouraging, but maybe a business with 100 employees could do more the other 11 months. Say, buy a folding electric bike that employees can borrow for 1-2 weeks and perhaps a buddy system. (How would that not pay for itself?) Then I think a “challenge” contest is more about recognizing those efforts that happen throughout the year.

Why not run it every month? Besides the PR effort. Computers don’t mind more work.

I agree, it doesn’t really translate for small companies that are already heavily centered around bike commuting. The only real benefit is adding to all the miles and people participating, which supports organizations like the BTA in having stronger data to advocate for better bike infrastructure.

But I also agree with Glenn, I think this event probably best aims at bigger companies, where the smaller communities of bike riders in those organizations can use events like this to encourage new bikers to join for the month and discover life outside of their cars and realize how they could actually be biking regularly(and loving it!). With over 2500 people in my company, the participation also helps in convincing our own company to spend more on improving bike infrastructure on site(better bike parking, locker rooms, etc). I know this event was the main driver in changing me from not even having a bike in 2014 into a “most of the time” rider.

I agree. A competition that glorifies someone who bike commutes 150 miles every day does nothing to encourage someone who might want to start cycling a few days a month.

I like this. Way back when I was our company’s team captain, I had suggested having a May challenge at a post challenge meet up. Good to see.

Beyond a way to invite new commuters, we had built a way to have bike fun that continued beyond the challenge. Internal challenges/competitions (tour jersey competition), monthly bike-to-lunch day, and just a whole bunch of camaraderie.

I have since left the company, but the teamness has continued and they have a lot of positive, supportive energy.

BCC was always a great time to challenge co-workers who were almost there to get on their bikes and give it a try. And it was exciting to see the miles that Daimler employees put up down on Swan Island my last few years there. I think it helped get the message to upper management that some better EoT facilities were long overdue.