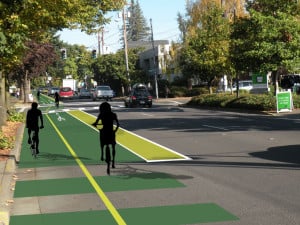 A student-driven project in Eugene, intended to create a “more comfortable and intuitive” link between the University of Oregon campus and downtown Eugene, seems to be on its way to construction and just scored a statewide planning award.

We’ve ventured south of our usual coverage area to track this project a bit because it’s such a good example of community-driven planning in a city with close Portland ties.

UO graduate student David Minor was killed in a car crash while riding his bike on East 13th Avenue in 2008. His parents have put up $150,000 in his memory to support this project.

“This goes beyond the norm of these kinds of student groups do, and they’ve taken it on their own task,” professor Rich Margerum, head of UO’s Department of Planning, Public Policy and Management, in a university news release congratulating the student team, called LiveMove, for winning the Student Achievement in Planning Award from Oregon’s chapter of the American Planning Association.

As we wrote in December, the project looks to reduce wrong-way biking on the 13th Avenue corridor by creating a two-way buffered or protected bike lane.

The project required some on-street parking removal to make room for the facility. Students took inventories of which spaces were being used most heavily and took steps to preserve those.

LiveMove members will receive the award May 30 at the annual OAPA conference in Portland’s Oregon Convention Center.

A two-way buffered bike lane would be a big, much needed improvement. Thank you, thank you!

Three suggestions: 1) make it extend east one block to actually connect to the UO where everyone is going; 2) physically buffer the bike lane with parked cars, planters and/or a low curb like in Europe; 3) make it extend a few more blocks west to the Fairgrounds where there’s no bike lane on 13th at all and connections to the Fern Ridge bike trail and Monroe bikeways are much needed.