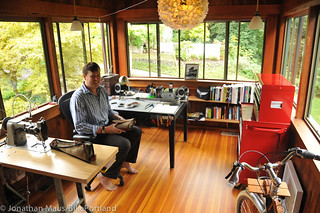 Starting a new small business is always a bit stressful; but 40-year-old Silas Beebe has the added pressure of carrying on a family name that spans three centuries in Portland business circles. And he’s doing it with a line of bicycling accessories.

The Beebe Company first set up shop in Portland and Astoria in 1884 as a supplier to the shipping and fishing industries. Over the next 100 years, the family business evolved with the times. As the 20th century dawned, The Beebe Company became added hardware and boat-building to its operations in downtown Portland. From the 1950s to 1970s, the Beebe name adorned a marina on the west side of the Sellwood Bridge. In the 1980s, Robert Beebe — Silas’ grandfather — opened a shop downtown that sold and repaired knives, keys, locks, and so on. Silas worked in that shop as a kid; but after his grandpa retired in the 1990s, the family name went dormant. 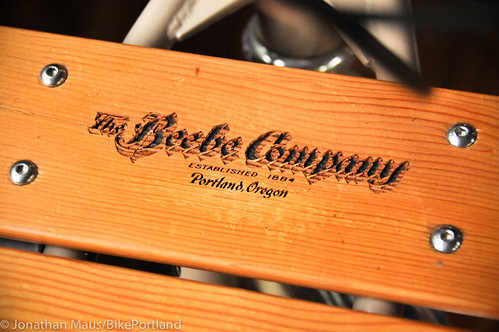 Beebe uses the same the same font that his ancestors used on
letterhead and stationary 129 years ago. 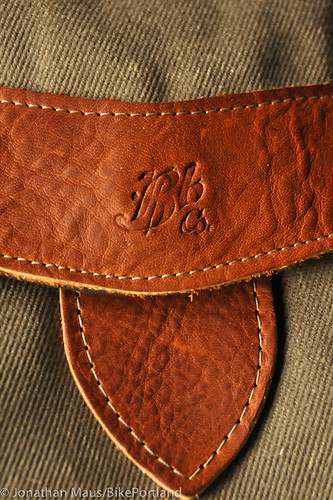 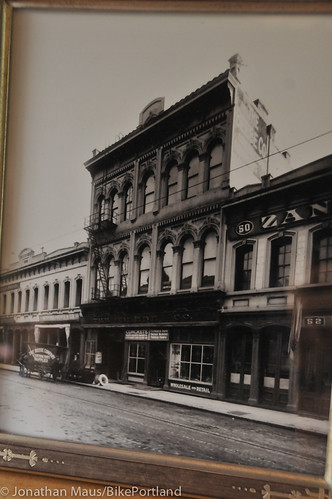 A photo of The Beebe Company storefront in downtown Portland circa 1910. 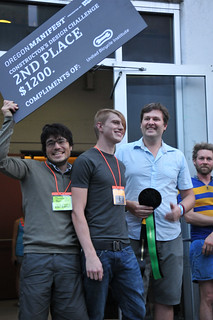 Beebe (light blue shirt) and his team
placed 2nd in a contest to design
the “Ultimate modern utility bike.”

Now, drawing on years of industrial design experience, Silas Beebe is the latest member of the family to work under The Beebe Company banner. “When I started looking for brand names and logos, nothing sounded right,” Beebe shared during my visit to his home workshop in the Willamette Heights neighborhood last week, “Beebe originally made products for transportation, so I’m bringing it back with bikes since that’s what I love.”

After a successful first foray into the bicycle world earned him second place at the 2011 Oregon Manifest Constructor’s Design Challenge (where he teamed up on a bicycle with local builder Rob Tsunehiro), Beebe has refined his product line and is working to establish a solid foundation for his fledgling business.

Like many product designers, Beebe has found an online home for his products on Etsy. His “Camilla” bike-friendly purse and handlebar bag ($199) was on the “Trending” list last week. Like all of his products, the Camilla is made from an assortment of high-quality materials including: black “English bridle” leather, water-resistant canvas, brass buckles and snaps, and reflective touches. 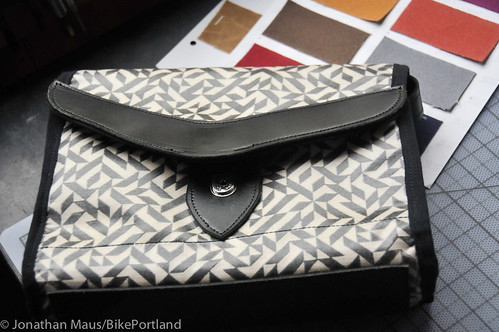 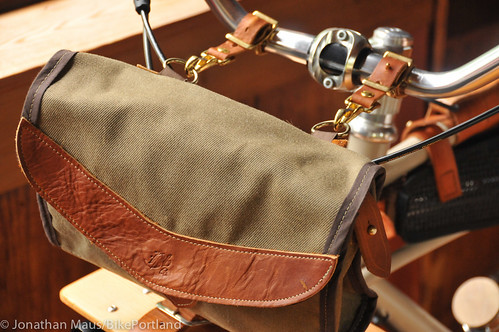 Other stand out items in Beebe’s line include his ‘Thurman’ phone holder and my favorite, the ‘Center Console’ — a frame bag that’s a perfect place to quickly stash and grab tools, a light jacket, or other small items. 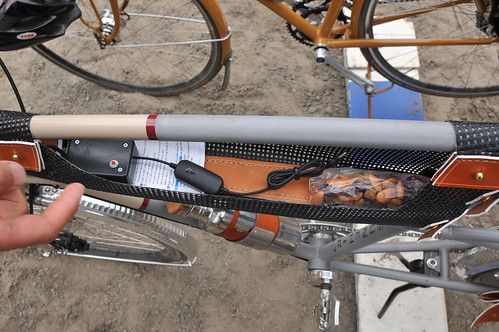 An early version of the ‘Center Console’ appeared on the Oregon Manifest bike he created with builder Rob Tsunehiro. 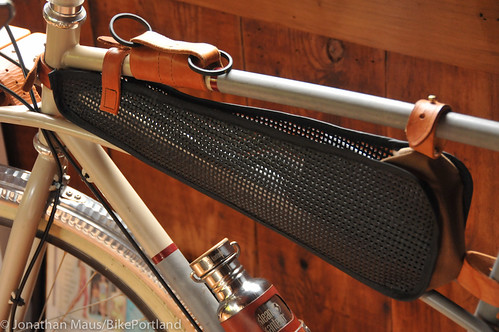 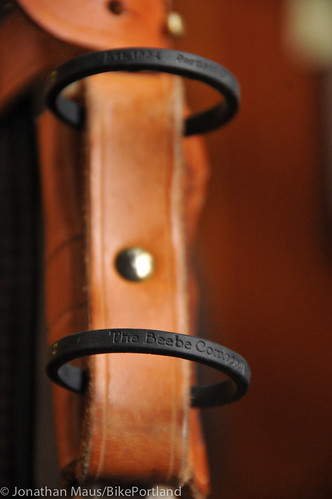 Beebe says he’s trying to fill the niche between bike shops and fashion/product retailers. Think of shops like Canoe that sell high-quality and premium-priced housewares or bike shops like Hub and Bespoke in Seattle. Just last week Beebe announced his products are now available at Manifesto Bicycles in Oakland, California.

Ultimately, he foresees only about 25% of his dealer base being bike shops. So far he’s seen strong interest in his products from Europe and he’s been approached by retail shop owners in Japan and Singapore.

In his home workshop, Beebe only does the prototyping and design. He’s partnered up with Last U.S. Bag company in Vancouver, Washington for manufacturing.

When it comes to his approach to bike products, Beebe sees he’s trying to break new ground. “There are lots of people making panniers, I’m trying to innovate and make something new.” That sentiment is captured on his product labels, which read, “Water and trend resistant: Bold fashioned supplies.”

And Beebe isn’t just all talk. He worked for Ziba Design out of college and spent several years at a design consultancy in Stockholm where he specialized in shoe design. At age 27, he won first place — and a $10,000 cash award — from Price Pfister for his innovative faucet design.

While he definitely has the talent, Beebe knows it takes much more than good products to build a successful business — especially one that will stand the test of time. “It’s a bit of pressure,” he admitted, in trying to carry on the family name. But with his background and knack for product design, I won’t be surprised to soon find The Beebe Company sign hanging once again in downtown Portland. 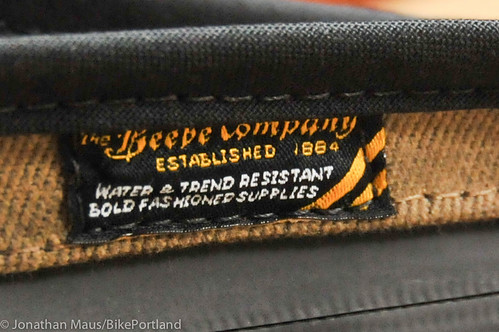 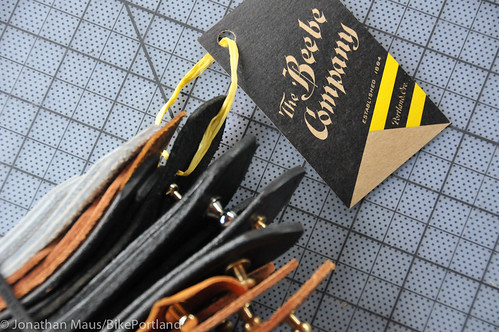 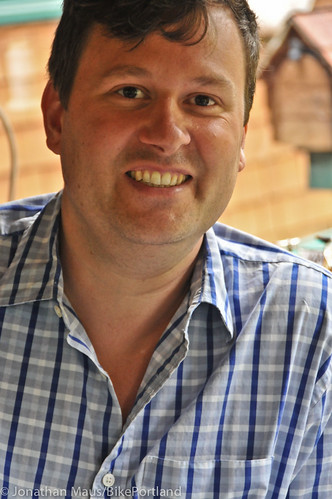 — See more photos and learn more about The Beebe Company on their Facebook page.

(Pssst though, I think you want to use “ancestors” rather than “descendants” in the first photo caption.)

Those are some classy-looking products. I wish Silas and Co — descendants and all 🙂 — the best of luck.

He has keen interest in hi-fi too from the looks of his desk. Nice aesthetic all around!

If only I knew what 9watts thought about this company my night would be complete!

Not sure why that would make a difference, but to complete your morning – our grandparents and great-grandparents ran in the same circles.

I just got a Beebe Co. belt. The design is pure genius and the craftsmanship is perfection. Now I don’t have to shave because nobody will ever look at my face. They’ll all be staring at my Beebe belt!!