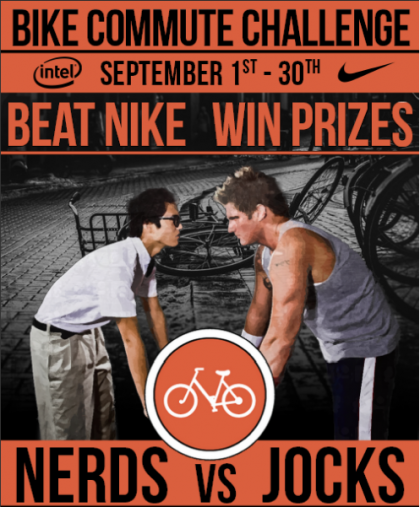 A digital flier by the competitive geeks at Intel.

In Oregon’s epic battle of nerds versus jocks, the nerds are winning.

The gearheads, the nurses and the bureaucrats are on their tail, though.

With six weekdays left in the BTA’s annual Bike Commute Challenge, Intel employees have logged 16,117 miles of biking to lead the contest in total travel, while Nike employees are in second place across the region with 14,529.

Of course, there are lots of ways to “win” the Bike Commute Challenge (as the nerds would no doubt point out if they weren’t in the lead). For example, you can count by total number of bike trips:

Or by the number of new bike commuters recruited for this year’s challenge:

Or by the percentage of participants at each organization that are new to bike commuting (among the 500 biggest organizations):

The challenge, organized every September by the BTA, is a great excuse to get on a bike during Portland’s most beautiful riding weather (usually, anyway) and learn your best route to work. This year’s has been especially fun, with Intel throwing down the westside gauntlet against Nike, the Trail Blazers’ official mascot getting into the action and Congressman Earl Blumenauer competing remotely from D.C.

Last week, when Daimler Trucks North America’s CEO announced a major expansion of the truck design and manufacturing firm’s North Portland headquarters (a $150 million upgrade that’s likely to include a big investment in bike parking, among many other things) he called out the success of Daimler’s Bike Commute Challenge team as one of the ways Daimler employees are able to enjoy the good life in Portland.

Here’s to that — and to ten more days of logging trips for fun and prizes.

stats from my office…

For what it’s worth, the BTA challenge website has never allowed me to delete myself from my team’s list (I’m on there twice, and can only update one of my logs) or make any other changes. This may not be the case for your team, but it’s been an issue for me the last two Septembers. The BTA has never replied to my requests for technical help on the site. So I drag my team down, even though I’m a 100% bike commuter. It’s very frustrating.

your team captain can remove you from the list.

Anne, I’m not convinced you drag your team down. If I’m not mistaken, the denominators for the overall workplace commute percentages are based on total on-site employee counts submitted by the team captains. So you don’t count twice as an employee, just once. And you count once as a bike rider (for the version of yourself that you’re updating!) so I think you’re all good.

Hi Anne! (and anyone else having trouble with the website!) Please feel free to send a message into the help at btaoregon dot org email account if you are having any trouble with the website, figuring out how to manage your team, or any other questions. We’ll get to your query as soon as we can! Thanks for participating this year, hope to see you all at the Bike Commute Challenge Awards party coming up the evening of October 10th. (Details forthcoming!)

I had that problem last year… no idea if I’m still on an old team, but I don’t think so because I switched teams and only use one email address… I just didn’t participate last year because my job was far away…

The key challenge data is (Sum of riders commute rate) / Total On-Site Employees = BTA BCC Commute Rate. Be sure to have your staff mark any time off and work from home or work out of town days as non-work days to boost the individual rates which will affect your team’s total rate.

I’ve bike commuted here 5 days/wk for eight years. I find the backslapping and time invested in quantifying my commute and logging into the site a complete waste of time. So my miles, and my wife’s , and I’m sure many others, go unlogged.

The bike commute challenge is not really for people who already bike, rather it’s to provide a challenge and incentive to people that either don’t ride or ride infrequently.

Logging miles on a website as part of a good nature competition is a waste of time, but logging a snarky comment a different website is not?

I imagine your comment would have had been less ironic and less condescending if you hadn’t started it with “I’ve bike commuted here 5 days/wk for eight years.”

It’s terrific that you are who you are and driven by whatever it is that drives you. Unfortunately not everyone is wired like you and may have different motivators.

Honestly, it is just fun.