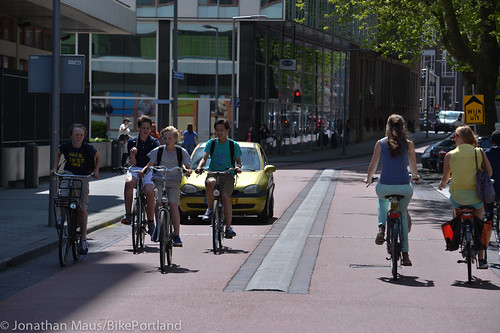 On this shared street in Rotterdam, cars are “guests” and bicycles have priority.
(Photos © J. Maus/BikePortland

This is part of ongoing coverage of the Green Lane Project/Bikes Belong Netherlands Study Tour.

Of all the cities I’ll visit on this trip, Rotterdam is the most comparable to a large American city. As such, the steps they’re taking to go from auto-dominated, war-torn, industrial city to a modern Dutch cycling paradise make for interesting observations. 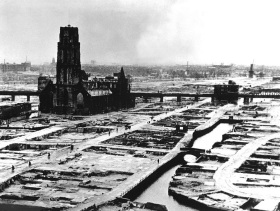 Rotterdam after the bombings of 1940.

The biggest parallel between an American city and Rotterdam is its modern urban form. Unlike every other Dutch city we’ve visited on this trip, Rotterdam is not defined by narrow, ancient alleyways, backstreets and quaint plazas. In 1940, German bombs flattened Rotterdam and destroyed all but a few of its buildings. In addition to social scars, those bombs forever changed the cityscape. Only a handful of buildings survived and the city was completely rebuilt in the 1950s.

Prior to the war the bicycle was by far the dominant form of transportation. In a presentation prior to a bike tour of the city yesterday, the City of Rotterdam’s Manager of Traffic and Transportation, Dr. Wim Hinkamp gave us a sense of how the war impacted bicycling. In 1939 the City counted traffic over just 13,900 cars and trucks and a whopping 77,900 “wielrijders” or people on bikes (not to mention 17,200 people on foot). There was so much bike traffic that the city gave wielrijders their own tube inside the tunnel to travel across the New Meuse river. 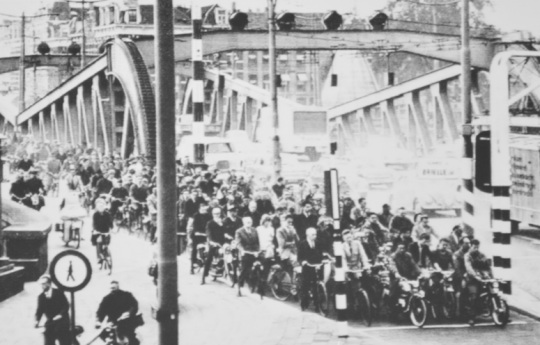 And here’s a 1942 sketch of the Maastunnel. The tube for bicycle riders is on the upper left… 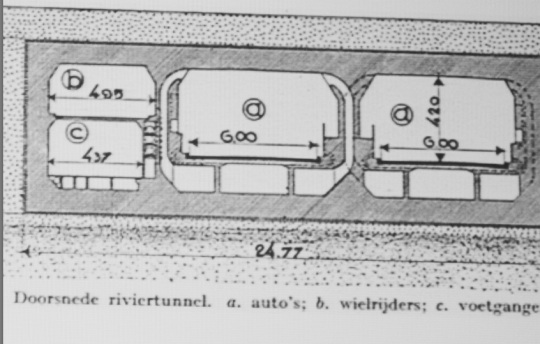 But by 1947, the number of people who biked in the tunnel had dropped to just 25,000 per day (Hinkamp said many Dutch people had their bicycles forcibly taken away by the Germans). By that time the city was marching forward in a “modern” style that they thought would assure economic prosperity; and from a transportation perspective that meant the construction of massive motorways where cars would have top priority. In a presentation about the historical context of Rotterdam’s transportation system, Hinkamp shared with us that, “At the time, cars were the future.” Hinkamp called 1945-1965 the “age of explosion in cars.”

Like other Dutch cities, Rotterdam’s citizens rallied against an all-out embrace of automobiles. They also began to build cycle-tracks in the late 1960s. However Rotterdam had wide roads and a cultural connection to driving that was stronger than other Dutch cities. Because auto use remained convenient and encouraged (policy-wise), bicycle use in Rotterdam is far below its Dutch peers. Experts say their bicycle mode share is about 18%, compared with 38% or so for other Dutch cities (and about 50% in central Amsterdam).

Rotterdam is also one of the largest harbor cities in the world. In the past few decades harbor-related activities have been pushed to the outskirts, leaving behind large roads that are being re-purposed into shopping and residential districts. During our visit I snapped a photo of Vierhaven, an old harbor road, from a window inside the City of Rotterdam headquarters building. It’s a gargantuan boulevard and Rotterdam city planners have designed it with two-way separated cycle tracks on both sides — that’s four lanes for bicycling! Check out the road’s massive profile… 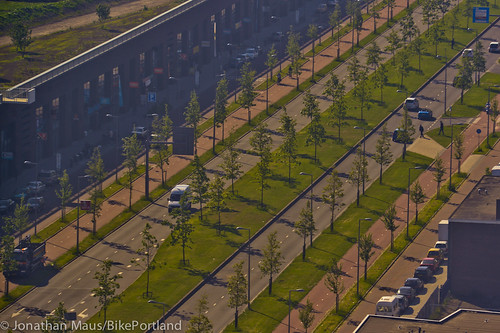 Vierhaven from above. The red areas on either side are cycle tracks.

Slowly but surely Rotterdam is catching up to its neighbors with innovative bicycle projects and bold transformations of public space. The man behind many of these projects is City of Rotterdam Senior Designer Warner Beumer. Beumer, a sharp dresser with a wit to match, took us on a bike tour of several projects he designed. 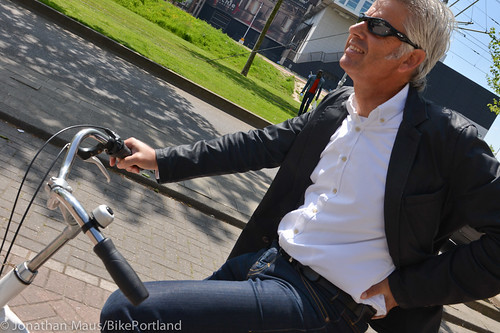 On Aelbrechtskade, a waterfront road in the New West part of town, Beumer seized an opportunity to create a waterfront cycle path where auto parking and a lane of auto travel once existed. Here’s the before shot… 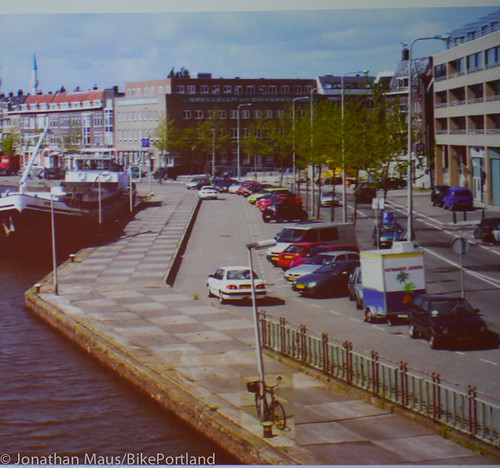 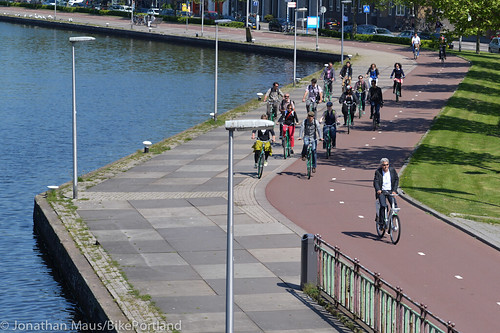 My favorite project Beumer shared was his “Bicycle Street” on Teilingerstraat. The sign at the entrance to the street says it all: “Bike Street: Cars are guests.” 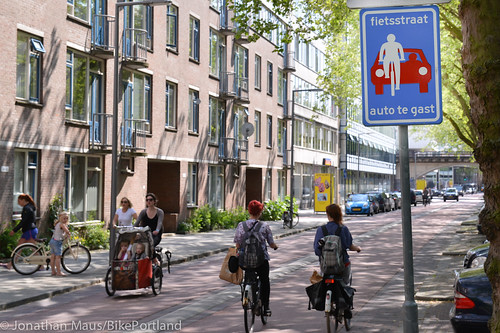 What was once a car-dominated environment, Beumer has transformed into a shared street where bicycles have priority. The profile of the street is two lanes with a median in the middle (that’s easy to roll up on). The surface of the street is red bricks (red is used for bikeways in the Netherlands) and it’s a 30 km/hr (18 mph) zone. It seemed to work very well while I observed it. People on bikes stood their ground in the lane and people would slow way when they drove up from behind. Many people simply drove slowly behind the bike riders. Others, if they wanted to pass, would just merge up and over the median, and into the adjacent lane to give the bike rider plenty of room.

Check out the photos below of the Teilingerstraat in action… 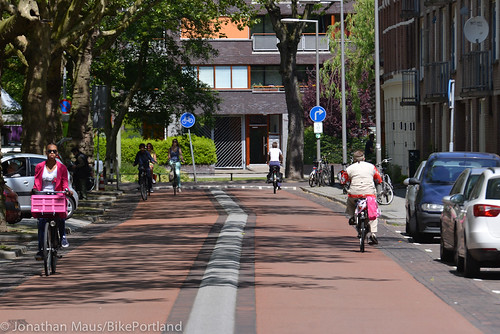 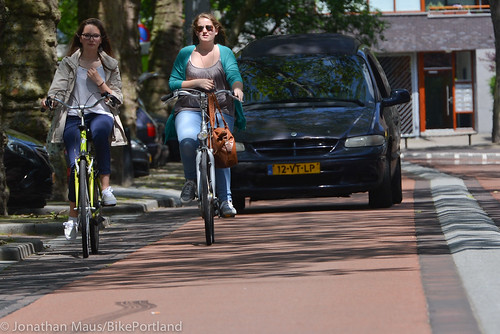 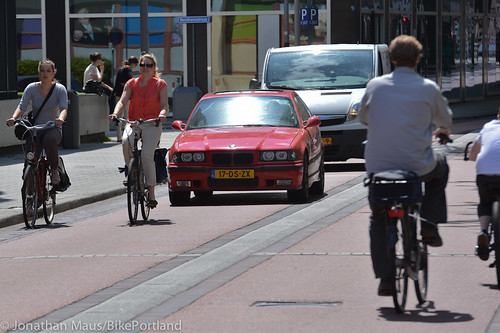 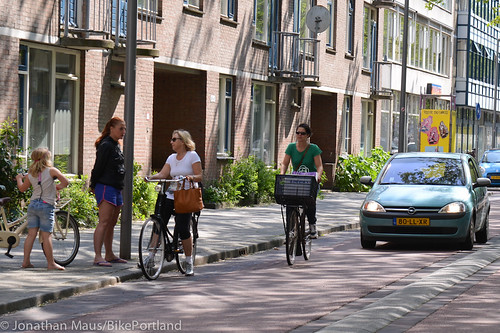 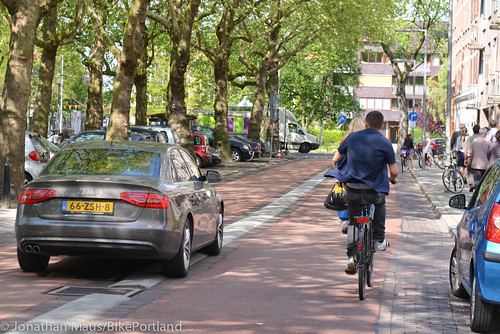 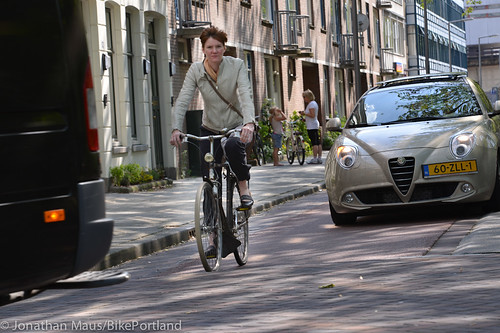 Transformations like these are partly why Rotterdam has seen bicycle use grow by 60% in the past 10 years, while auto use has remained flat. They’re not near the 77,000 daily tunnel riders they had in 1939 (current number is about 20,000); but they are moving the needle. “You have to do it slowly,” offered Beumer, “Or people won’t have time to adjust.” In the meantime, Beumer will remain in an envious position for city planners. He’s got the roadway space to, in his words, “Make it nice for everyone.”

— Read more coverage of my trip to Copenhagen and the Netherlands here.

BONUS! Because it was such an interesting place, here are a few more images of our Rotterdam bike tour… 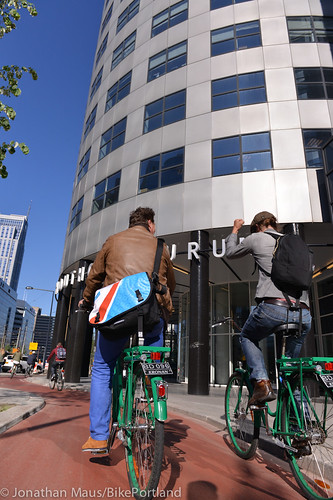 Rotterdam is full of modern buildings and exciting architecture. 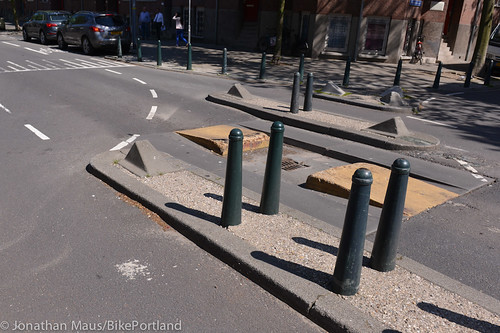 This is some serious diversion… And it comes with the nifty feature of only allowing a bus to pass through. 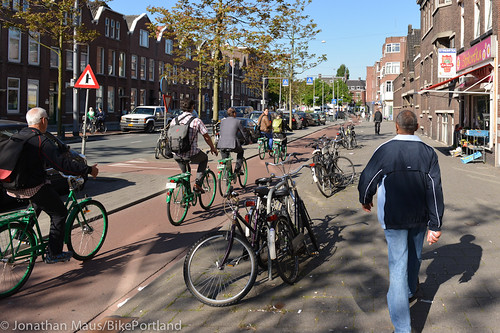 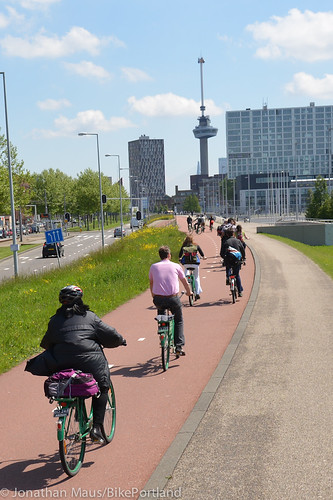 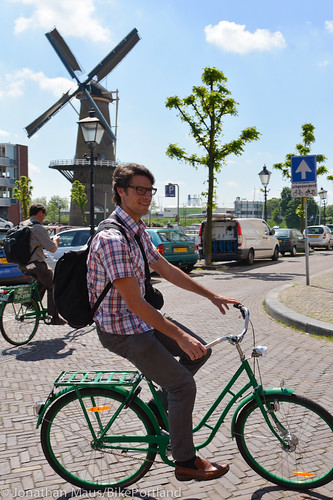 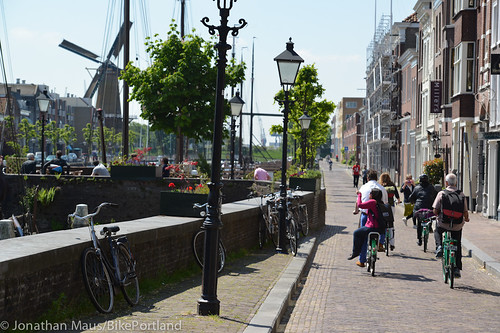 The Maastunnel was built during the Nazi occupation and it’s still a key river crossing. You take an escalator down and then pedal through a cool corridor to the other side… 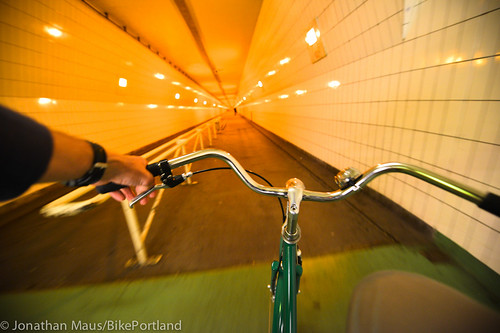 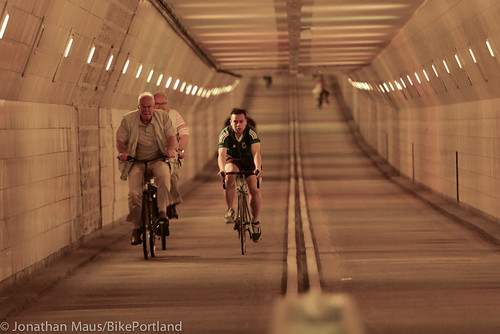 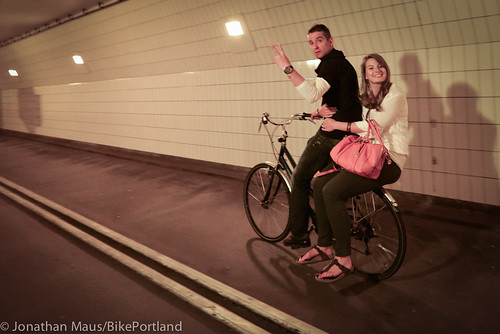 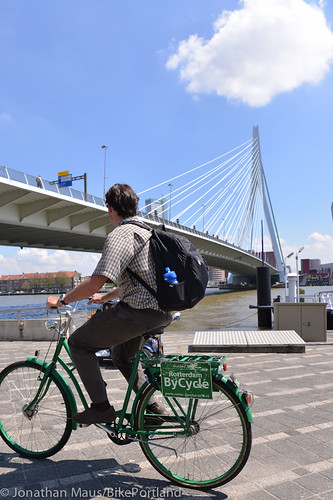 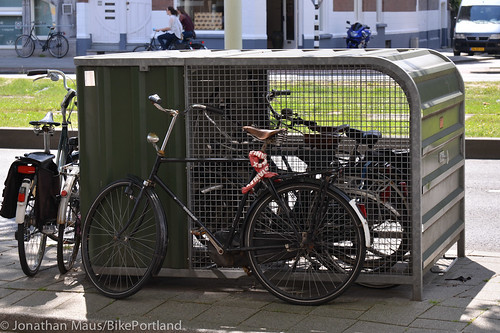 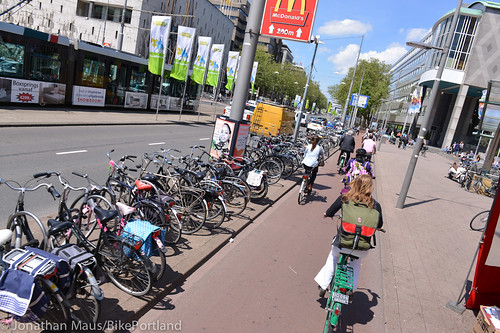 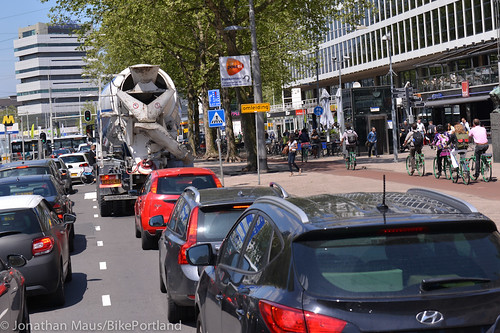 Look familiar? (Besides the cycle track in the upper right.) 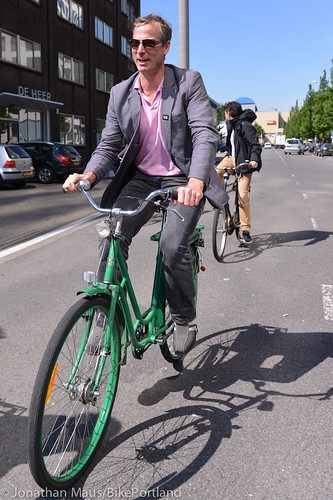 More photos in the Rotterdam gallery.

Fascinating, Jonathan. Insights into the the history of a place always help in understanding it today. I had no idea that Rotterdam had been rebuilt in the 20th century. The streetscapes do look a little more like home, don’t they?

I take it that the bright-green bikes are rentals? Or is there a bikeshare program in Rotterdam?

Hi Anne, yes those are rentals. The best place we saw to rent a bike in Rotterdam is under the Erasmus Bridge. But if you want to visit different cities (like Amsterdam) in The Netherlands your best bet is doing a bike trip from city to city. The country is very small and distances between cities are doable by bike. We went on a bike tour last summer (with a small but decent touring company, http://www.hollandcycletours.com if you’re interested, I heard http://www.eurobike.at is also decent).

It has been over a year since my week in Rotterdam, and I’m still searching for ways to convince Warner Beumer to spend some times in Portland.

There are several articles about cycling in R’dam on bicycledutch’s site. Including one on the maastunnel. With video.
http://bicycledutch.wordpress.com/?s=Rotterdam

In Netherlands you can find American-style urban environments (e.g. Rotterdam, Dr. Wiedbaudstraat in Amsterdam, etc.), a whole range of other urban, suburban (e.g. Assen) and rural environments –its all served by 1st class bike infrastructure we in American can learn from.

I like the bike parking separated cycle track. Could be SW Broadway.

Vancouver, BC has done this as well.

A great example for those who deny or resist implementing good infrastructure in the US by claiming it’s easy for Europe with tiny pre-automotive streets etc to implement places for bikes and peds but claim our existing structure makes this either impractical or impossible for the car-centric patterns we’ve built. (and are building still!)

It takes will and vision coupled with a populations demand to make this happen in such places (like Rotterdam) and it is far from impossible. This is even more evident in Germany (arguably as car crazed as the US) where they continued car infrastructure madness well into the 80’s and were farther along than Rotterdam in US style development until they came to their senses. In a few decades they’ve shown even such car-centric places as that can be relativity easily transformed.

They also neatly answered the chicken or egg argument that stalls sane development here. You know; where civic leaders, DOT folks etc claim there isn’t demand for such changes; after all where are all these supposed cyclists wanting this? (often only 1% share mode in many cites here) That’s how it was in Germany too in the 80’s but after it committed and was built users came out of the woodwork. Build it and they will come! Those us us “converted” who read things like bike portland will ride almost anywhere, but 95% will not until they feel safe and comfortable.

A final humbling thought; Rotterdam may only have half the ridership of Amsterdam but that half is still 3 times Portlands (lest we get too smug about how great a place this town is for cyclists 😉 and about 8 times that of a typical US city!

did you see the 2 bike valets at the shopping areas?

I can’t even imagine being able to ride down a street with cars behind without feeling the pressure to get out of the way. What bliss that would be!