Time for ‘Wheel Team 6’; an elite squad of bike activists 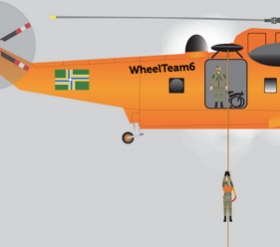 This morning’s protests of the Jarvis Street bike lane removal in Toronto spurred me to finally publicly share an idea I’ve been daydreaming about for a long time now: An elite squad of bike activists that swing into action and swoop down on cities and towns to defend bicycling.

When I hear about blatant bike injustices around the country, I envision these elite activists parachuting in, documenting the problem, exposing the bad guys, and forcing the change/fix/policy that’s needed.

— Are the police in your town showing complete apathy when it comes to tracking down dangerous drivers who kill and then leave the scene? Call Wheel Team 6.

— Is your Governor so afraid of powerful interest groups and so uninformed about traffic issues that he has opposed attempts to pass a safe passing law? Twice?! Call Wheel Team 6.

— Is your mayor ranting against bicycling and threatening to remove bike lanes? Call Wheel Team 6.

Initial response on Twitter has been positive. Some say they’re ready enlist. Others say we should use Kickstarter for start-up funds. One of our friends, Ethan Jewett, was kind enough to mock up a design for our Wheel Team 6 chopper… 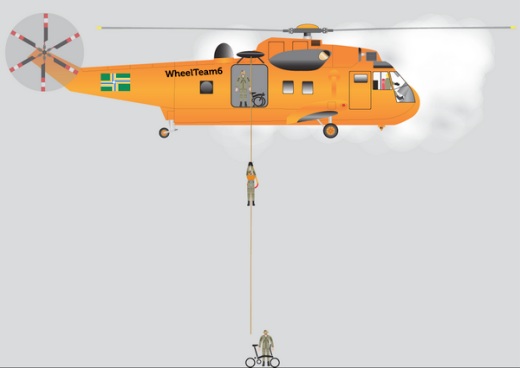 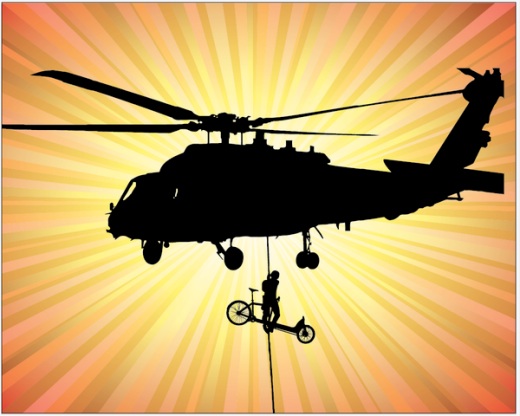 OK, so maybe this is just a fun thought experiment. But, if nothing else, perhaps it provides someone inspiration for a Filmed By Bike project! (Thanks MJ).

I have the URL’s should you require them Mr Maus,

The Seals hunted down, shot and killed Bin Laden, giving to SEAL Team 6 an extraordinary name familiarity the team wouldn’t otherwise have had. That’s quite the name and deed upon which to build name familiarity and mission for a bike advocacy group.

Is the chopper pedal powered?

I wonder if Nutcase would issue WT6 helmets, in blue with UN insignia and “AGENDA 21” on ’em. http://www.theatlantic.com/national/archive/2012/02/is-the-un-using-bike-paths-to-achieve-world-domination/252572/

Yeah, I’ve been dreaming of skydiving with relief-supplies-loaded cargo bike. I’d like to join your team, Jonathan and perhaps expand it’s mission.

Exactly, thanks. No pants/no problem. I dream of a post-pants planet.

the revolution will not be wearing pants

According to Matt Bissonnette, they were all pretty vocal within their group against Obama.

who said anything about burning fuel? In my dreams, everything is human-powered.

This group would definitely have some Bike Fridays and some Portland Design Works swag!

Don’t underestimate the power of getting a bunch of ordinary people together, in the streets, and making noise. This is especially powerful if you have clear demands. It doesn’t have to be a dream.

— Is your transportation department going to launch a bike sharing program in your city? Call Wheel Team 6.

Nice reference to this article in relation to the new Bloomberg Associates team, J. 🙂

Vote Up0Vote Down  Reply
« Protests in Toronto against bike lane removal (and why you should care)
Portland women team up for ‘Let’s Race Bikes!’ initiative »