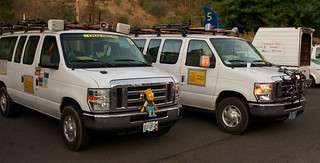 Last month I spent a week volunteering on Cycle Oregon in one of their SAG vans. I get a lot of questions about what exactly a “SAG” is and what we do to support the ride, so I figured I’d share a bit more about my experience.

Even some people who have ridden Cycle Oregon for years, who’ve been lucky enough to avoid mechanical programs and fatigue and so haven’t needed a ride, have asked me how the SAGs work. And while the logistical details are interesting, there’s a whole other reason why I choose to volunteer in a SAG van year after year.

First, a little background on SAG vans and Cycle Oregon.

According to many seasoned riders I’ve spoken with, there was a stigma attached to catching a ride in a SAG van in the early years of Cycle Oregon. Originally riders who needed a ride from a SAG van, for whatever reason, had to miss out on the rest of that day’s ride. Once you got into a SAG van you were required to take it the rest of the way into camp, making climbing into a SAG van a “game over” sort of moment. 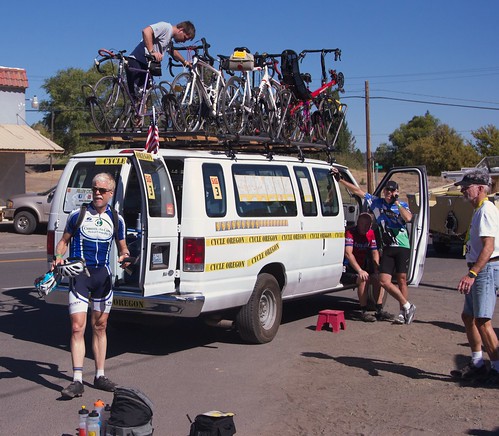 As Cycle Oregon has grown, people have realized that there are many reasons why someone may need a ride in a SAG van and people shouldn’t be “punished” for wanting a ride.

These days you can get picked up by a SAG van and get dropped off later in the route. It’s not a taxi service, and the vans are there for the safety of the riders on the road first and foremost, but volunteers in SAG vans can accomodate just about everyone who needs a lift to the next rest stop, Bike Gallery mechanic, or safe place along the route.

For instance, along with mechanical breakdowns and medical concerns, the SAG vans now transport people down steep and technical descents if they don’t feel safe riding downhill at high speeds.

I’ve fielded lots of questions from people who wonder if anyone “abuses” the SAG vans, asking for a ride when they’re not really tired and could actually continue riding their bike.

In the four years I’ve volunteered in a SAG van I can say virtually all the passengers I’ve had in my van have either had mechanical trouble with their bike (e.g. a broken spoke) or they’ve had clear, unexpected medical issues that make riding difficult or impossible.

Volunteers David Shoop and Maria Monteleone count riders
as they pass a SAG on this year’s Cycle Oregon.

People obviously signed up for Cycle Oregon to go on a bike ride. You’d have a hard time finding many people on Cycle Oregon who would purposely choose sitting in a stuffy, sweaty van over cruising through Oregon’s countryside on a bike.

To make sure the vans can carry everyone who might need a ride, each of the eight SAG vans on Cycle Oregon are equipped to carry up to twelve bicycles and a total of eleven people (nine passengers plus a two-volunteer team). The vans also carry snacks, water, basic medical supplies including an AED, and some basic bike tools like tire levers and a pump. 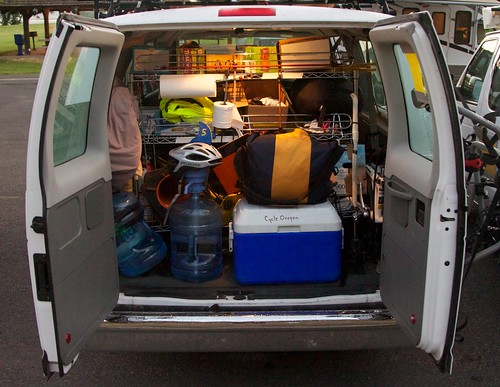 It takes a lot of gear to support over 2,000 people on bicycles.

It’s important that the vans stay spread out through the ride, placed where people are likely to need their help. Volunteer teams in each SAG van are assigned one of three types of work on any given day of the ride: they can “be on count”, they can be assigned “rover duty”, or they can have “hill duty.” 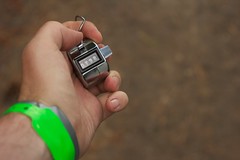 “Being on count” means the SAG van will wait at a designated spot early in the route and count riders as they pass. Most days there are four SAGs (half the total number) assigned to be on count each day and each van will count about one quarter of the riders before moving on and passing the count to the next van in the count order. That process keeps four vans spread evenly throughout the riders as the day goes along.

The other half of the SAG vans are generally assigned “rover duty”. Rovers leave camp in order, about half an hour apart, and proceed along the course around the same time as the vans counting riders. Rovers don’t need to worry about staying with a specific group of riders which provides some flexibility to reverse course, move further ahead, or transport supplies along the route as needed. 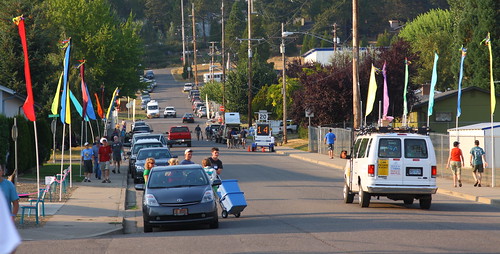 “Hill duty” is only assigned on days with a challenging ascent or descent . On an ascent the vans provide supplies like water and food, and on a descent they’re there to ensure riders’ safety. 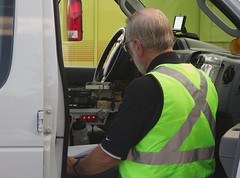 To coordinate all this activity, and respond to emergencies when needed, each SAG van is equipped with a number of radios, many of which are provided by the volunteers.

One of the two volunteers in the van uses the radios to relay information about how many riders are in the van, where the van’s headed, and any other pertinent information.

I’ve heard the term SAG explained as an acronym for “Support And Gear.” You’ve seen that the vans do carry a lot of gear and the volunteers are there in the vans to support the riders, but the logistics of the job don’t fully encompass the role the SAGs play on Cycle Oregon.

In addition to the supplies the vans carry to keep people safe, volunteers in the SAG vans spend hours of their own time and money collecting and building decorations, party favors, external lighting and audio systems, and other gear; some volunteers install industrial bubble machines and water sprayers on their vans. 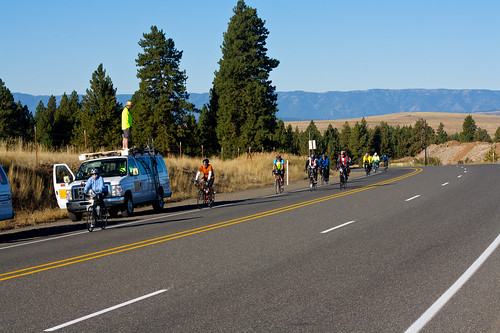 Volunteer Ray Scholl stands on his SAG van as riders pass by during 2010’s Cycle Oregon.

People riding bikes on Cycle Oregon would still get from start to finish without all of these “extras” but that’s not the point.

Over the years volunteers have grown the role of the SAG vans from simple “support” to more of a cheering section, ensuring people on Cycle Oregon have a fun and rewarding experience.

Each year the volunteers, myself included, take a week of time away from friends, family, and work to help with Cycle Oregon. It takes a lot of hard work to support the ride, but being the cheering section for over 2,000 people on bicycles is what keeps most of us coming back.

Ascent not accent. Descent not decent.

Thanks for catching those Matt!

I dunno, I’d say many accents are decent.

On my CO ride, i discovered a few pointers about riding in the presence of SAG wagons.

Volunteers at lunch/rest stops may not know if their containers contain Glykos, or water. SAG Drivers do. (btw, the water that is on tap (typ. near the blue rooms) is drinking water, if you’re not sure, ask a veteran rider). Carry a couple of water bottles, and if you are out of water (or unfortunately loaded up on Glykos and not water) give the driver a thumbs down signal, and they can refill your bottles. I didn’t know this on the first day, and ended up with a pounding dehydration headache when I accidentally filled both bottles with Glykos and couldn’t drink the stuff.

Make sure your bike is a light as possible. You probably don’t need that rear rack, or U-lock while on the ride (or the handlebar bag, binoculars, 3rd waterbottle w/cage (or waterbottle sized battery for your uber-light). This will help you in headwinds, and hills (or the SAG’s crew lift your bike after you have a severe dehydration headache).

Thanks for the informative article Will. And mucho thanks to ALL ride volunteers everywhere who spend their days plugging along in hot vans waiting for the last of the pack to catch up so we can all enjoy the rides. I’ve sagged two smaller rides in my own cargo van, and patience is a must, but you do meet some nice people. One tip: make sure the organizers save you food/beer cuz you’ll finish late!

The SAG Wagon at CO was always fun to get passed by, the music blaring was usually a nice distraction from the day’s work. I am very thankful to the volunteers who made the ride what it is… Simply the best ride in America!

LOVE IT. Thanks for all your service.

On my first ragbrai #4 the sag wagon was a hay rack pulled by a pickup and no one wanted to get caught riding on that. The hay rack had no shade and the rig stayed at the back of the pack so it was a hot nasty ride. Now sagers ride in air conditioned vans sipping cold bottled water and eating finger sandwiches.

Finger sandwiches? It’s not quite that glamorous, unfortunately, but there are some granola bars and water in the vans. It’s really only enough to keep people safe and healthy until they can get to the next rest stop or into camp for the day.

Yes, they sure do. The HAMs have some of the longest shifts of most volunteer positions because they’re up and ready with the first rider in the morning and at least some of them stay on the radio until after the course closes each day.

Great behind the scenes insight. Thanks

The whole HAM Radio system on Cycle Oregon is fascinating and impressive. I love buttonholing those volunteers and getting them to open up their vans and talk about all the the complex planning and deployment of the radio network.

The SAGs have speakers on them pointing forward, playing music, and this is brilliant – you know it’s them coming up behind you, so you can give a thumbs down signal if you need help before they are alongside you. Also, the drivers have a great sense of humor with respect to music choice…

I am amazed how many volunteers it takes to pull off Cycle Oregon. Without you, the ride simply wouldn’t happen. I particularly remember the volunteer at the top of Dead Indian Hwy. this year energetically warning riders about the long, steep descent ahead. I hope he got free Ben and Jerry’s to soothe his throat when he arrived in camp.

Thank you for all you do!

I am THAT volunteer. And no – I did not get ice cream when I got to camp – or even chocolate milk. However, I did get the satisfaction of knowing there were NO accidents on the downhill into camp. I hope that I made a small contribution.