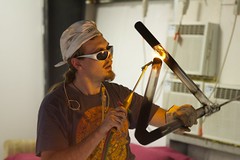 Inspired by Cycle Oregon’s visit, the
owner of Turtle Time Glass works
on a glass bike frame.
(Photos: Will Vanlue)

[BikePortland contributor Will Vanlue was a volunteer on the Cycle Oregon ride last week. This is his latest dispatch.]

Most days on Cycle Oregon riders travel from one community to another, spending just one evening in each town. But one day during each ride there’s a two-day layover that gives people a full day to explore the host community.

This year that layover day fell in Ashland, a town with vibrant and varied local businesses eager to welcome Cycle Oregon riders. Since many people chose to spend the whole day in Ashland, fewer people were out on course and fewer volunteers were needed to support them. That gave me a chance to explore a bit on my own.


The first place I dropped by was Turtle Time Glass, a relatively new glass blowing studio that happened to be located right on Cycle Oregon’s official route. The owner of Turtle Time Glass was so inspired by everyone coming to town on their bicycles and decided he should build a bike frame entirely out of glass. 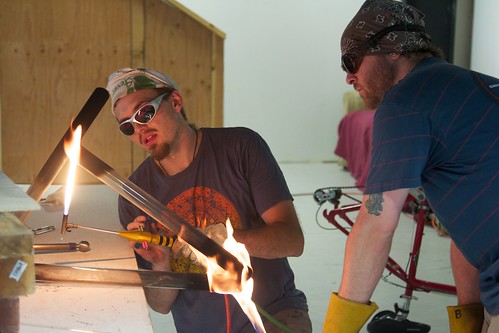 Watching him and his staff work on the frame was impressive. They based the design off a Schwinn mountain bike and were able to recreate the frame geometry almost perfectly. 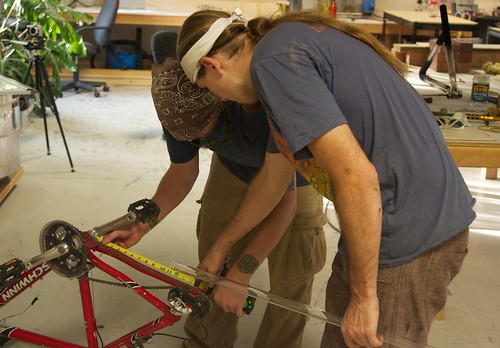 Turtle, the studio’s owner, tells me that he hopes to turn the glass frame into a neon light and he’s already been in touch with a local bike shop interested in purchasing the piece to display in their window. He’s promised to send me a picture of the finished product and I hope to share it here when he does. 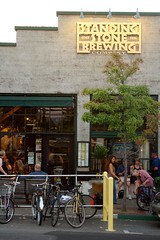 The other business I had a chance to visit was Standing Stone Brewery, located in Ashland’s downtown district.

Standing Stone has a great program for employees who want to ride to work. If an employee makes a commitment to get to work on a bicycle, they receive one free from the brewery.

Local bike shops in Ashland provide the bicycles, which feature beer-inspired graphics. The owner of one of the shops that provide the bicycles, Ashland Bicycle Works, just happened to be standing outside the brewery when I was there and said other business in town are taking note of Standing Stone’s program and are looking at starting their own.

He also commented on something I had noticed myself when riding around town: many of Ashland’s off-street bike facilities provide a more direct route through town than facilities for cars. The result is that many people choose to ride a bike because it’s faster, safer, and more pleasant than driving even in a town known for it’s weather extremes.

I wish I had more time to explore Ashland, but Cycle Oregon continued on before I had seen everything. I know for sure though, that I’ll make a point of visiting Ashland again. And I’ll definitely bring my bike.

That first photo reminds me of a piece of equipment I had in college… I believe it was called an Apogee?

Ah, yes… the memories are coming back through the smokey haze….

Glad you enjoyed my hometown… but remember, you haven’t experienced Shakespeare until you’ve read him in the original Klingon!

I would be sure to have the bike shop interested in having the neon glass bicycle to check with the city’s sign code first, for it may not be permitted.

i wouldn’t have it outside in any way, shape, or form.

Portlanders love their glass pieces, beer, and bikes… sounds like you represented us very well…

In the town square, near the fountain, there is a bike service facility on the sidewalk. It has a tire pump, tools and work stand for all to use. The tools and pump are cabled to the stand so they don’t walk off. Very cool town, hot springs, Shakespeare and great vibe. Our Cycle Oregon camps had been in towns with less than 200 residents for four nights, Ashland was a perfect choice for a two night stay.