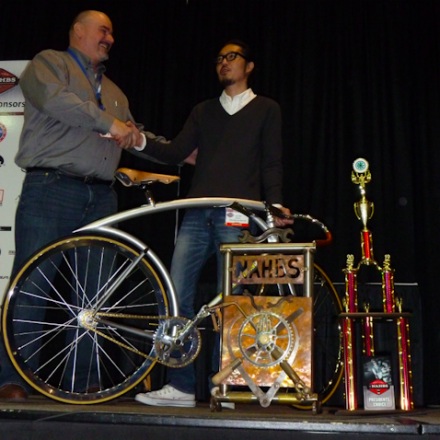 After announcing that this year’s attendance at the 2012 North American Handmade Bicycle Show set a new record with over 8,100 visitors to the Sacramento Convention Center (Austin set the previous record last year with 7,316, Portland had 7,200 in 2008) show founder Don Walker and his panel of judges handed out the last round of awards.

As we shared (a bit prematurely it turns out) last night, the award for Best Finish went to Oregon’s own Vendetta Cycles for their eye-popping, elegantly detailed, bright green “Screaming Eagle” track bike. 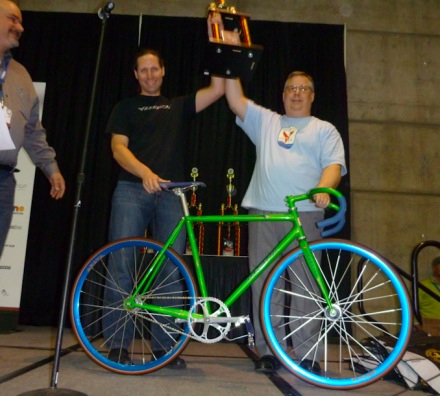 Aaron Stinner of Stinner Frameworks collected the trophy for the Rookie of the Year with his steel 29er. After a decade of experience in the bicycle industry, Stinner completed a brazing course at the United Bicycle Institute in 2010 and went into business building frames in Santa Barbara, California. 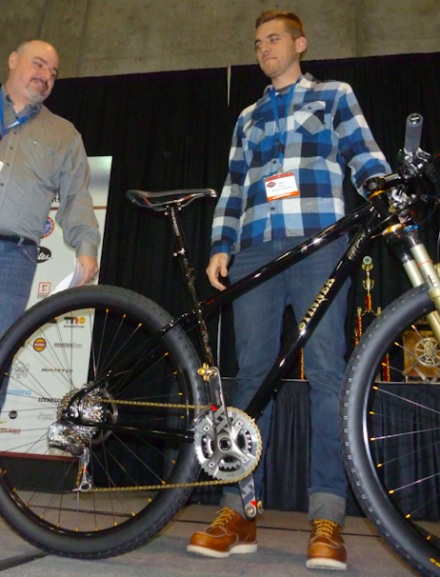 The President’s Choice award went to a stunning bike from a builder who is no stranger to the NAHBS stage, having collected three previous awards: Shin-Ichi Konno of Cherubim. The elegant curves and highly polished finish made his highly experimental track bike a showstopper.

When the ballot boxes were closed and the votes tallied for the People’s Choice award, Paul Brodie’s 1888 Whippet replica (profiled here) took the prize in a landslide victory. 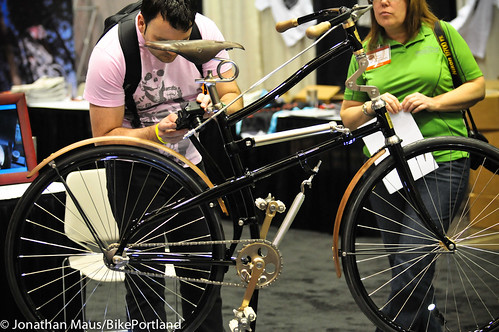 This outstanding machine was exhibited by the University of the Fraser Valley to help generate publicity and boost enrollment in Brodie’s framebuilding course. They aren’t likely to have trouble filling classes any time soon.

But, the award for best in show was still unclaimed, all alone on a corner of the awards table. But it wouldn’t be alone for long as the dreamlike lines of Cherubim’s track bike must have stolen the heart of many of the NAHBS judging panel as well as the president. Shin-Ichi Konno waited near the stage to hear Walker call him back up to receive the award for Best of Show, previously held by Oregon’s Mark DiNucci.

The flash bulbs popped, the builders smiled and the people cheered the winners. Now, with the final bit of showmanship completed, the crowds began to file out of the convention center while the builders began packing up their bikes and booths in preparation for the journey home.

It has been a great show, filled with beautiful bikes, passionate builders and enthusiastic supporters. If this year’s show is any indication, the handbuilt bicycle market in the United States is stronger than ever and continuing to grow and evolve.

More riders are seeing the merit and value in a bicycle made by craftsmen in small shops rather than overseas factories and more buiders are tooling up to meet the demand. Senior builders are sharing their skills and knowledge with the younger generations, and someone’s new dream bike is being built right now, somewhere in America.