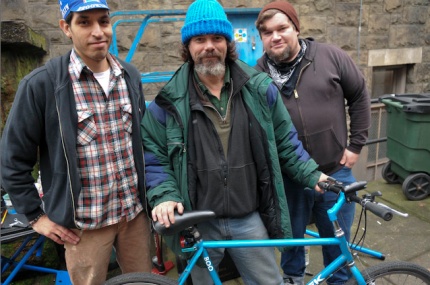 Yesterday I got a chance to hang out with Wrench Raiders, an up-and-coming non-profit that provides free bike repair for Portland’s homeless population. 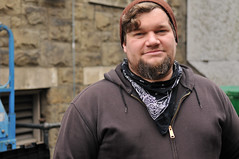 I met up with C.J. Speelman at his outdoor bike repair station situated between Grace Bible Church and St. Stephen’s Episcopal on SW Clay in downtown Portland. Speelman, 28, has only been in Portland for two years, but he’s already well-known among our city’s homeless population.

“The whole reason for this is to build community. That’s what bikes do.”
— C.J. Speelman, Wrench Raiders founder

Originally from Victorville, California, Speelman has been working with the homeless for about six years. For him, bikes are merely a way to build community and relationships. “I was looking for what I could give folks besides food and then I started to notice how many of them had bikes, and it hit me, transportation!” So Speelman taught himself how to fix bikes and started doing it for free. But in Victorville, bicycling isn’t exactly flourishing, so his repair stand didn’t get a lot of business. 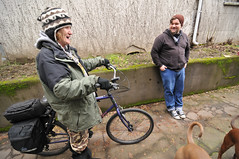 Speelman moved to Portland with his wife two years ago. When he set up his repair stand under Portland’s Hawthorne Bridge for the first time back in April, it didn’t take long for word to spread. “That first summer started slow, but as word got out, we’d do as many as 12 bikes in about three hours. It was crazy.”

As I chatted with Speelman I noticed a man beaming with a smile as he came back from a test ride. “It’s amazing! It’s like a new bike! Thank you!” Wrench Raider volunteer mechanic Jacob Martinez had just installed a new set of brake pads on Larry Carver’s blue Trek mountain bike. A few minutes before that I met a woman named Candy who was equally grateful after getting a derailleur adjustment. 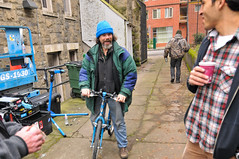 Everyone likes a well-maintained bike, but for Wrench Raider customers — who can’t afford bus passes and have no other way to get around — reliability takes on a whole new meaning. “A lot of these people have extreme barriers to transportation,” said Speelman, “and for some of them, it’s their only way to get to the hospital. It’s life and death. It’s really important.”

Beyond keeping everyone rolling, Speelman knows that the true value of his work is just being there. “The whole reason for this is to build community. That’s what bikes do.” 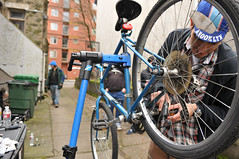 With nearly a full year under his belt, Speelman is now looking to expand and build his organization. He needs donations to purchase more brake pads, cables, and other replacements parts. He also hopes to purchase a cargo bike that’s capable of hauling all his tools. The idea, he says, is to have a mobile bike shop so he can take his help directly into Portland’s most disadvantaged neighborhoods.

Another thing on Speelman’s 2011 agenda is to build a bridge to the homeless community. “A lot of us dehumanize homeless people,” says Speelman, “This is a way to demystify all that… I’d like us to be able to build a bridge to the at-large community and bring everyone together.” We swapped a few ideas on how that might happen. A group ride perhaps; maybe one where instead of cans of food, everyone brings a spare bike part they’re willing to donate.

With the amount of Portland’s homeless population that gets around by bike, Wrench Raiders seems like a much-needed addition to our city.

Dang. This is right near my work. St Stephans and Grace Bible seem like a good fit for this sort of work. The neighborhood needs it and both churches do a huge amounts of homeless outreach. (Plus St. Stephans has their bike shrine.)

There are a lot of low income folks in the buildings in this neighborhood who could use help with their bikes. I’ll try to stay up-to-date with Wrench Raiders so I can do my part to facilitate the connections. Wish I had heard about this earlier!

The Wrench Raiders rock! Thanks for showing great leadership in making cycling accessible and reliable for folks who are often ignored in the mainstream bike repair world. This work is important on so many levels, well done!

“The whole reason for this is to build community. That’s what bikes do.”

The truth was spoken.

I’ve seen the work being done, and it’s solid. Helping people have transportation helps people get and keep jobs, and feeds families. This is much more than spokes and tires.

These guys have a nice big Karma bank. Well done.

This could be a life-changer. Well done.

I dig it! Wondering if a partnership with a larger bike shop would be in order.

Kudos to the Wrench Rangers for their important work. And Kudos to Jonathan for covering all the stories about Portlanders and their bicycles, even those who won’t be spoofed in the Portlandia series. It’s really important that we, as activists, recognize stories like this and find ways to advance the roll active transportation can play in a litany of varying social movements, from the equitable to the environmental.