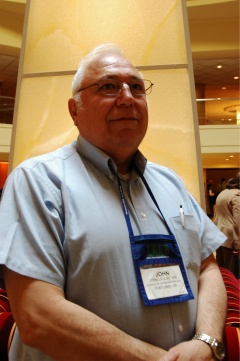 Taking a break in the lobby of the Marriott during the TRB conference, I noticed a man nearby with Portland on his nametag. He turned out to be John La Verdure, an engineer who lives in Troutdale and advises the The Bureau of Indian Affairs (BIA) on technical issues with building roads on Native American reservations.

I asked what conference sessions he was attending, and he launched into an enthusiastic description of a flaw that has lately become apparent in the 12 inch concrete slabs used to build many highways. The slabs shift slightly, over a long period, so that 20 years after they’re installed, one end will be 1/16 inch lower than perfectly flush. That’s why, when you’re driving across North Dakota, the road feels bumpy.

This is not a topic I generally get excited about, but La Verdure’s interest was contagious. I asked what in his opinion are the major transportation issues for Indian communities. “Funding,” he said.

“For the social fabric of the community… there needs to be walking and biking.”
— John La Verdure

Indian reservations often have depressed economies, La Verdure explained, and are not able to raise money from increasing property or income taxes or imposing greater fees the way that city and states are able to. Thus their entire transportation budgets come from an allotment of the US federal gas tax, which does not sufficiently fund all projects.

I asked about non-car transportation, and La Verdure said that bicycle and walking paths are not prioritized on reservations. Moving goods and services to and from the reservation, particularly the natural resources such as minerals, sand, and gravel are, he said, “the basic elements of the economy.” So roads for cars and trucks are necessarily prioritized.

Bike and walking paths are often planned when roadways are being designed, and then dropped because of lack of funds. “But for the social fabric of the community,” he pointed out, “there needs to be walking and biking.”

Options other than driving are much needed on reservations. Safety is a major concern — there are a lot of white crosses along roadsides, La Verdure said. Also, on reservations, not everyone can afford to buy a car, and those who do buy cars aren’t always able to afford gas and maintenance. As a result, walking is how many people get around — often for trips of many miles, and often along major roads. But there is no funding for anything but vehicular infrastructure.

“The State of Idaho is helping the tribe pay for the path, as part of its requirement to use a certain amount of its transportation budget for nonmotorized transportation.”

La Verdure knows of one planned multi-use path, on the southern edge of the Coeur d’Alene reservation in Idaho. The path will connect the two communities of Tensed and de Smet. De Smet has a school and a number of other resources that Tensed lacks, and currently anyone who wants to travel between them without driving a car must walk along US Highway 95.

The State of Idaho is helping the tribe pay for the path, as part of its requirement to use a certain amount of its transportation budget for nonmotorized transportation.

La Verdure thinks the path will particularly be a boon for schoolkids. He hopes that bicycling to school can become a feasible option once the route opens: “Once we get them on a bicycle, they’re going to stay on a bicycle.”

Even though we’re from the same place, I doubt I would have run into John La Verdure in Portland. I’m glad I did here.

That’s cool. Thanks for representing, Elly.