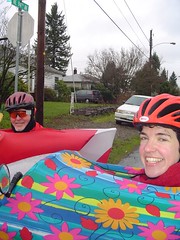 Yesterday I had an earth-shattering realization: Recumbents are just bikes and the people that ride them are normal, friendly people.

OK, I’m exaggerating a little…I never actually thought they’d be abnormal or mean or anything….it’s just that we all know how a certain stigma exists between ‘bent and upright riders. I have long been curious to experience the ‘bent scene and finally got my chance yesterday.

Back in November I met Michael Wolfe at the PUMP Swap Meet. Michael is a bike nut. He’s got all types of them and he’s especially fond of recumbents. When he realized I’d never ridden a recumbent he offered to loan me his and show me what they’re all about. 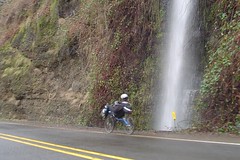 On Sunday I finally caught up with Michael and some of his friends (Carolyn, Dave, Kirke, Cathy) from the Oregon Human Powered Vehicles (OHPV) club. Instead of easing into it, we decided to do it right and ended up putting in about 35 miles. We rode from Gateway Transit Center, out Springwater Corridor to Gresham and onto the Sandy River into Troutdale and back home via Marine Drive. Here are some thoughts from the ride:

It was a great ride (see all the photos) and I couldn’t have asked for better hosts than Michael, Carolyn and their friend Dave (aka “Slug”). Look forward to doing it again sometime (and Michael, next time I’ll take you up on the post-ride hot tea and biscuits!).

Thanks for the kind words, Jonathan! We all really enjoyed having you along for the ride, and I’m glad you had such a good time. I hope 35 miles wasn’t too much; I have a terrible sense of perspective as to what distances folks are comfortable with.

Also, I’m really glad you got a couple pictures of my TourEasy (the bike I loaned you) early in the ride. It’s NEVER that clean at this point in the year, and I’m pleased that the occasion was recorded.

Hey Jonathan, looks like you guys had a great time! I wanted to ride with all of you but overslept a bit. You got it right, bikes are well……bikes! I ride anything and everything, and am glad to see more open minded people.

You guys must have been the group that past me (on my ICE Trike) as you turned east onto Sweetwater off the 205 bikepath. How dare you yell about my “funny looking bike”!

Hey there! Where did all the funky bikes come from? There aren’t THAT many ‘bents in all of South Dakota. Great story, I have similar experiences here with “serious riders” that I meet. Next you should go racing with on a bent. THAT is fun!!!
Regards,
Jester Jay

Great story! So, when are you buying a bent? 🙂

Wish I could afford one Alan! But then there are so many different types…how do you decide (did I just open can of worms or what?). By the way, your blog looks great, I can tell you’re a design pro.