Back in November, I posted about a poster that Sacha White of Vanilla Bicycles was creating with local artist Dan Gillsdorf. Now that the print is finally done, I’ve been waiting for Sacha’s permission to publish more details. After first offering it to Vanilla owners, he has given me the green light to share it with you.

According to Sacha, the print was inspired by his affinity for the work of French artist Alphonse Mucha (1860-1939). Here’s more about the original work from Sacha:

Kevin Hulick will be sponsored by Vanilla Bicycles for the 2006 cyclocross season. Hulick, who won the “A” category in the prestigious Cross Crusade series last year, will join accomplished racers Shannon Skerritt, Molly Cameron, and Rhonda Mazza aboard a swanky new Vanilla cross bike this fall.

Hulick, who went to school and raced bikes at Chico State University in California, now splits his time between Corvallis and Portland. He’s “pretty excited to be riding bikes built by Sacha,” and who wouldn’t be?

Sacha White, the former Portland bike messenger behind the southeast Portland based company, has become one of the most sought after custom bike builders in the world. 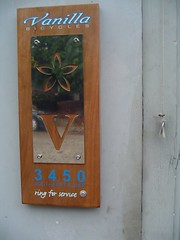 Met with Sacha (the man behind Vanilla Bicycles) today to talk about a project we’re working on and he mentioned some very cool news.

First, he’s commissioned Dan Gillsdorf of Atlas Tattoo to design the first-ever, limited edition Vanilla Bicycles poster. I didn’t see the sketches, but Sacha says it will be in the style of a vintage, art-nouveau advertisement and will feature his wife and daughter riding on their Vanilla stepthrough city bike with the cityscape in the background and something about a flock of swallows flying around. Sounded very cool.