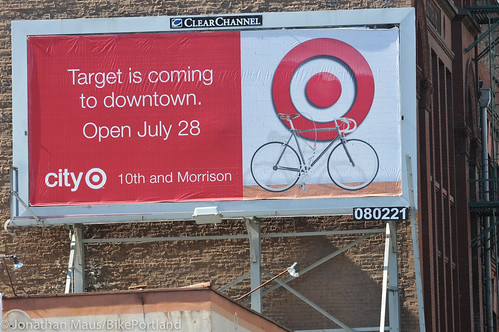 The nation’s smallest Target, which opened its doors on the west end of Portland’s downtown Wednesday, was happy to use bikes in their marketing campaign.

“I’m all for Target jumping on the bike bandwagon, but you’d think they’d put some parking in.”
— David Backes, customer

That makes sense — the store’s urban location and lack of free auto parking mean that the retail giant is banking on bikes to bring in plenty of its customers.

But making it easy to park a bike nearby? Maybe the site managers never got the memo.

Three days before its grand opening Sunday is expected to swamp the joint with bargain-hunters, bikes had already filled the three bike staples and all the sidewalk fixtures outside the new store at Southwest 10th Avenue and Morrison.