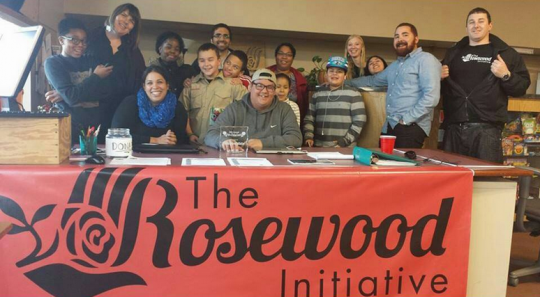 The Bicycle Transportation Alliance has just announced their latest round of heroic bike advocates who have earned Alice Awards.

The Alice Awards is the BTA’s largest annual fundraising event. And this year’s is a bit extra special as the organization celebrates its 25th anniversary.

Below are the three organizations and one individual who will be honored at the event (along with descriptions provided by the BTA):

Metro: Oregon Regional Government
Formed by a 1978 statewide ballot initiative, Metro works with communities, businesses, and residents in the Portland metropolitan area to chart a wise course for the future while protecting the things we love about this place. The past year has seen Metro pass two very impressive policies that will have long range impacts for our region: the Regional Active Transportation Plan and the Climate Smart Strategy.

Better Block PDX
Better Block PDX seeks to create inviting and interactive places that challenge the notion that streets are only for cars. The Old Town project in October of 2014 really put them on the map when they re-imagined 3rd Street as it travelled through Old Town including crossing Burnside. As a result of this three day project, PBOT installed six new crosswalks costing $10,000 each, and the Old Town Hospitality Association began thinking of how their neighborhood could be redesigned.

Susan Otcenas
Susan Otcenas has invested an enormous amount of time helping to build a healthy and safe environment for people biking in Washington County. Susan believes bicycles break down barriers – physical, cultural, and socioeconomic – between people, and provide a path to independence for people in all walks of life. She especially encourages more women to ride for health, recreation, and transportation.

Read more about the winners and get tickets for the big party on May 28th at the Alice Awards website.

Better Blocks is making a sweep of it! Weston and Alice.

As a past ABT winner (2005), I wish to say congratulations to all. It is always a competitive deep list of nominations the BTA has. And welcome now to the “ABT” family! :
– METRO;
– The Rosewood Initiative;
– Better Block PDX; and
– Susan Otcenas.