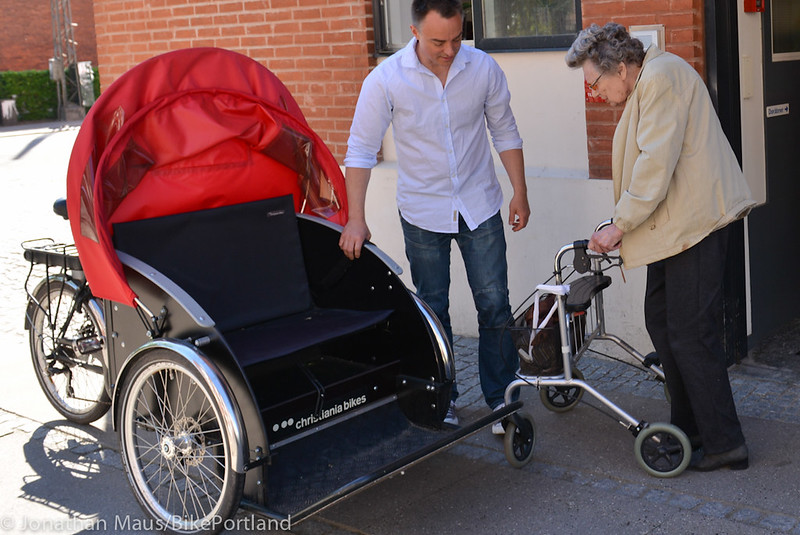 Ole Kassow, the founder of ‘Cycling without age,’ helps 95 year-old Else Hansen into a rickshaw.
(Photos © J. Maus/BikePortland)

Can you imagine spending your entire life cycling the streets of a beautiful city every day alongside your friends and neighbors; then when you reach old age you become too weak to ride, move into a care home and never see those streets again? Ole Kassow can. Ole is a 46 year-old resident of the Østerbro district of Copenhagen. He’s a citizen activist in his spare time and he owns a successful business consulting firm called Purpose Makers that helps companies find meaning in their work and instill a sense of purpose in their employees. He volunteered at a home for the elderly when he was a student. He would spend his days helping them eat and lifting them out of bed.

Now he makes time each week to take elderly people out of their rooms and back onto the cycle tracks through his “Cycling without age” program. I joined Ole for a ride this morning and it was a fitting way to end my time in Copenhagen. 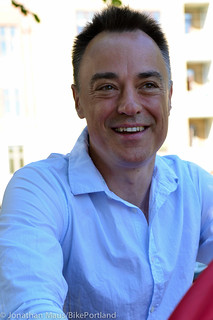 There’s a care home just a few blocks from Ole’s house. “I know the staff take really good care of them,” he shared when I met him this morning, “But they don’t really get out much.” Then Ole had an idea: What if he took them out for a bike ride? Bicycling has been part of daily life in Copenhagen for a century, he thought, and these people probably rode their bikes around as well, “So I borrowed a rickshaw and went over their and asked if anyone wanted a ride.”

Ole was surprised when they didn’t just kick him out. “10 minutes after I got there, these two old ladies came out and I took them for a spin. Then a few days later they called and asked if I could take a few more.”

Without these rides, residents of the care home would never travel beyond its doors. Even if they are strong enough to go in a wheelchair, Ole said those would only go around the block. Now with the rickshaws he takes them out for 3-4 mile jaunts through the city. And they love it. “Some of them have become quite addicted actually,” Ole said with his trademark smile.

Word quickly spread and a few weeks after that first ride Ole got a call from the City of Copenhagen asking for his help to expand the program. “They said, ‘We want to buy some rickshaws,’ so they went out and bought five Christiania’s [a popular cargo trike].” The bikes arrived in March and the program, while still experimental and limited to the Østerbro neighborhood, will likely keep growing.

When we arrived at the care home, 95 year-old Else Hansen (seated) and her friend Karen Jensen, 90, were waiting for us. As we made our way out to the rickshaw near the front door, Ole and Pernille Brandt, a staff person at the home, gingerly helped the ladies get seated. I could tell it was a major effort for the women; but I also tell they knew it would be well worth it. 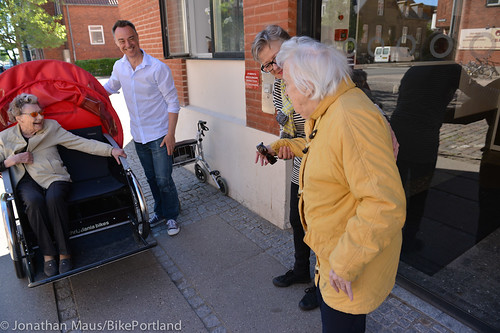 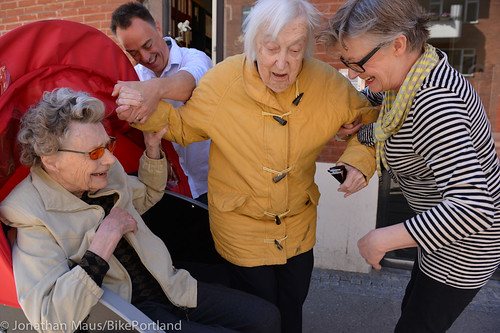 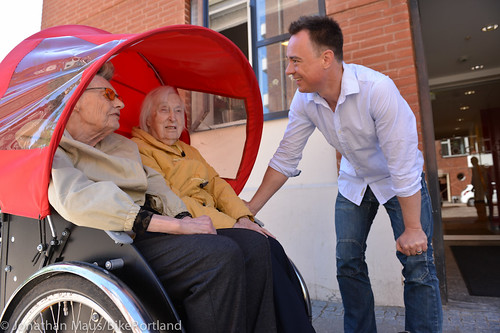 Once seated and buckled in, Ole bent over and asked them where they’d like to go. They chose the famous Little Mermaid Statue, so off we pedaled.

As we rolled down the cycle track outside their building, the women waved triumphantly to friends watching from the windows… 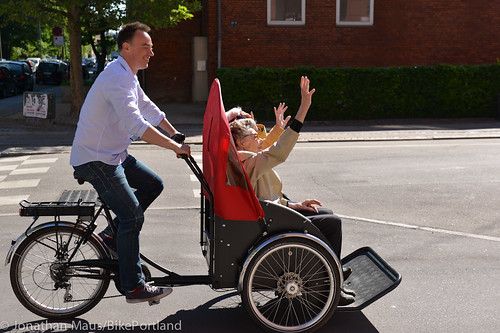 Riding with someone pedaling two elderly women in a large rickshaw (it’s wider than most cargo bikes) in a city environment really puts the safety of your streets to the test. This would be impossible in a place with lots of potholes or high-speed cars swerving and honking at you for holding up “traffic”. But we had no problems. Ole and I could even chat as we rode. It was stress-free and I think we all appreciated the significance of this ride in our own different ways. 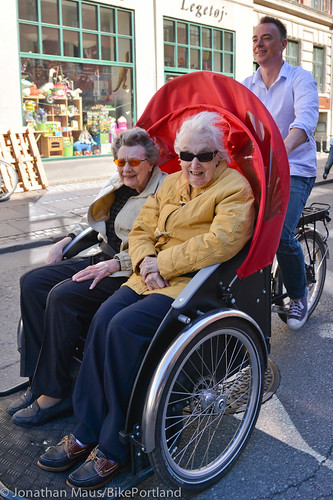 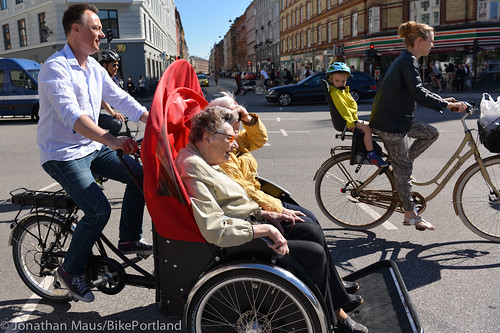 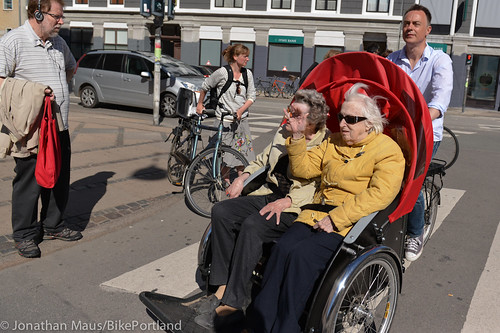 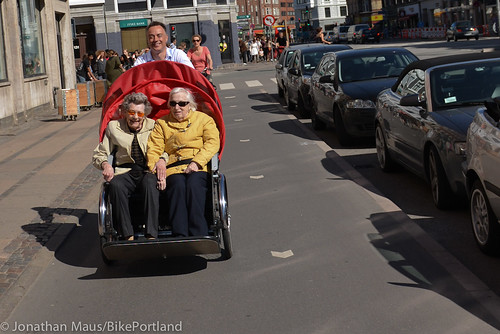 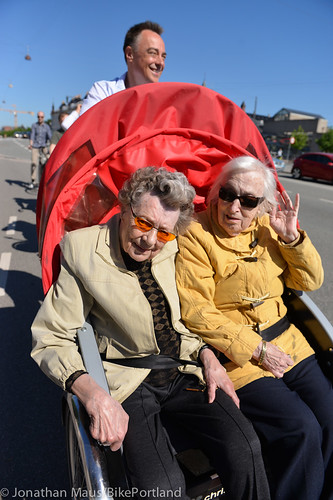 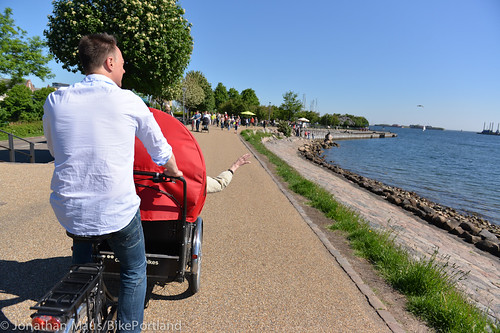 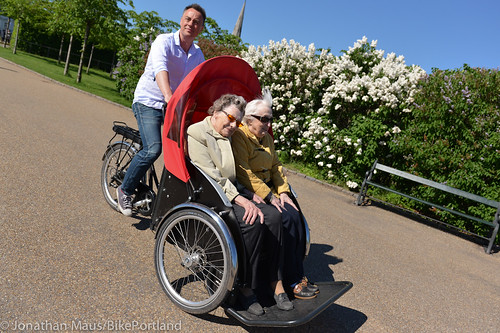 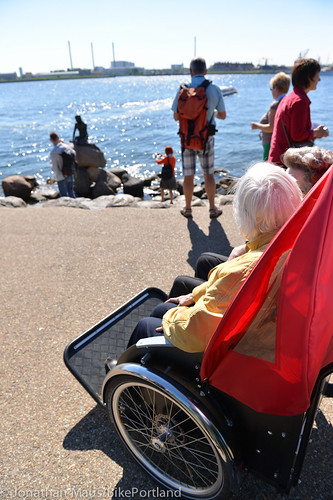 “They just miss going around to the streets where they used to cycle and live,” Ole shared, “When they see a certain place, the memory comes back and they start talking. I get to hear all their great stories.”

Since he started it back in August, Ole’s program has taken off. In just one and-a-half months, his Cykling uden alder (“Cycling without age”) Facebook page has signed up 50 volunteers. In each of the five participating care homes there’s a designated contact person who the volunteers can call to schedule a time to ride. Ole gives them a brief tutorial on riding the rickshaw and then they head out. He’s also talking with a local business interested in using the program as a volunteer opportunity for employees.

I have a feeling next time I go to Copenhagen I’ll see many more of these rickshaws in action; and many more elderly folks smiling and waving and remembering what it’s like to be rolling through a city once again.

“One of the themes of the program,” said Ole, “Is that they city is the most beautiful from the cycle paths. It’s one thing to drive through; but when you’re on a bike it’s even more beautiful.”

I couldn’t agree more. Thanks for letting me join you Ole! 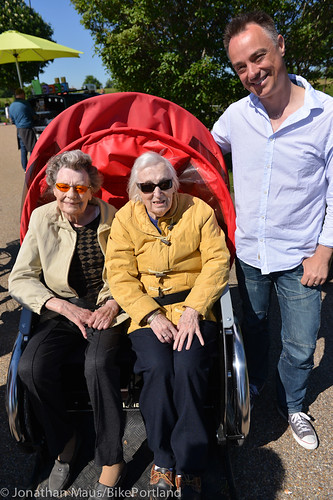 Mr. Kassow is my hero.

I think it would be so fun to have one of those front-loading rickshaws, but I’d be afraid that a sudden stop would dump my passengers out the front…

We can and will have that here one day. Smart folks, those Danes.

Man. Thanks so much for this post. Designing cities for humans!

How wonderful! Ole, if you’re reading this, thank you!

This is such a wonderful story! and glad to hear that the City took initiave to expand the program despite potential “budget concerns”.

This story rules so hard. What a fantastic idea!

This is the best story I’ve read on BikePortland and perhaps the internet in many months. Inspired and beautiful.

Thanks for saying that Zaphod. And to everyone else, I’m glad you liked this story. I am thankful that Mikael Colville-Andersen set me up with Ole. Somehow Mikael knew I would love this program and he was right.

I think this is a program that could be easily replicated all over. The important thing would be to map out a very smooth and safe route.

It is unfortunate but in our litigious society the insurance needed for such an effort would be quite expensive.

I was so happy to share this story and photos with my sister, (who is an RN) and that was the first thing out of her mouth…
….It ruined my warm fuzzy.

Thank you for this moving and inspirational report (and for the earlier report on young riders in Copenhagen)!

this has to put a smile on your face…love this

Great piece, Jonathan. Thanks for this — and for all of the cycling stories/news covered by BikePortland

Question…whre can I get one of these bike? anyone know?

Unfortunately in Danish only.

They have them at Clever Cycles. Although not in rickshaw mode. But I bet they could help you connect the dots.

The little mermaid statue! I loved Copenhagen. Everyone seemed so happy.

Thanks for joining us, Jonathan, and for the great write-up and pictures. The two ladies loved the attention and all the photos being taken. I overheard Karen say to Else: “Do you think we’ll be famous?”. And in a way they are now.

What a wonderful, sweet story. And great photos! Thanks, Jonathan and Ole. I’m going to share with my mom, who will be 84 in a few months. I know she will find it delightful.

Love, love, love this story! Couldn’t agree more with idea that Copenhagen is most beautiful from the bike lane! Keep it up Jonathan!

You made my day. I’ll have a smile on my face for hours. I ran errands with my 86-year old mom today on the bus. That was satisfying, but this looks like way more fun.

This is such a wonderful story.
There are so many people in convalescent homes who would love something like this. Thanks for posting.