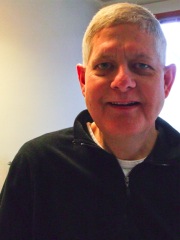 A pioneering traffic design and engineering specialist who rode his bike to work every day and helped forge PDOT’s bike-friendly disposition, passed away on October 30th after a long bout with brain cancer.

Portland native Doug McCollum graduated from Portland State University in 1985, was hired by the Water Bureau one year later and then transferred to PDOT in 1986.

His daughter Caitlin works in the Transportation Options division at PDOT. In an email to me shortly after her dad passed away, she recalled,

“When I was in kindergarten and it was “parent career day” or something like that, he brought road signs. When I was older and explaining what he did for a living it was “he puts in speed bumps”, and later “bike lanes”.”