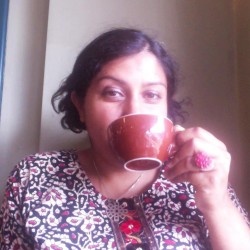 Fun for everybody! A 7-point action plan for a more diverse Pedalpalooza 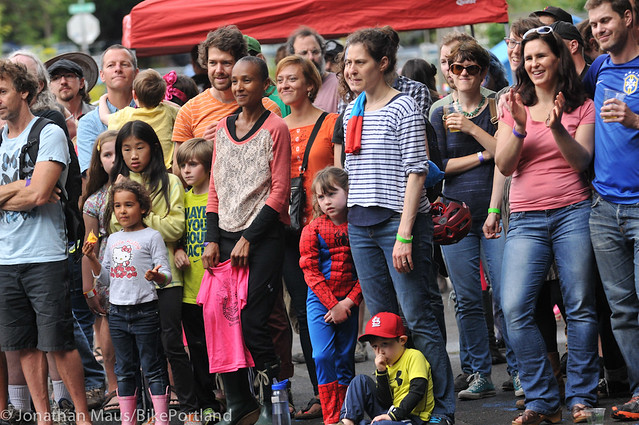 Not long ago, I thought more bike lanes would save the world. In fact, my passion for a better environment for bicyclists and pedestrians was one of the reasons I moved to Portland.

Since then I’ve become disillusioned with the bike advocacy movement, largely because of its lack of racial and ethnic diversity.

According to the recent CNN article by comedian/activist W. Kamau Bell, called Gentrifying Portland: A tale of two cities, “Portland is 76 percent white. That’s a lot, for two reasons. 1) According to the 2010 census, the United States is 72% white, so Portland is whiter than America. 2) Portland is considered a major city. And we don’t associate major cities with whiteness,” he says.

END_OF_DOCUMENT_TOKEN_TO_BE_REPLACED

Column: Whether we like it or not, bicycles are peace machines 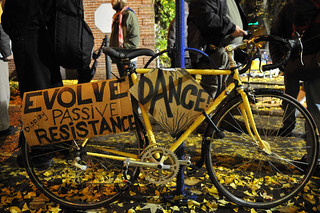 If you want to stage a violent protest or go to war, don’t do it on bicycles. Bicycles are inherently non-violent.

Last month, a gang of indignant and ignorant motorcycle riders decided to stage an armed protest outside a Phoenix mosque against the “tyranny of Islam” in response to an incident where two Arizona residents were killed by police outside a Muhammed cartoon-drawing contest in suburban Dallas.

“Armed Bikers Plan Anti-Muslim Protest Outside Arizona Mosque,” headlines read. The protesters strutted in front of the mosque during Friday prayer in t-shirts that said “Fuck Islam” while brandishing firearms.

I was shocked and dismayed by the hate and bigotry. But the headlines got me thinking: what is it about bicycling — in contrast to motorcycling or driving — that is incongruent with what happened in Arizona?
END_OF_DOCUMENT_TOKEN_TO_BE_REPLACED 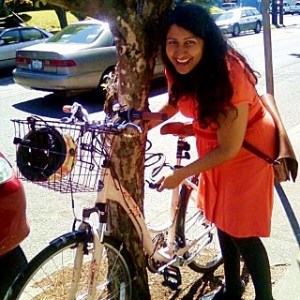 Bike elitism can show up in lots of ways. One way is car-shaming.

Do you own a car? If you don’t own a car, do you use car sharing more than once a month? Do you accept rides from people? Do you use a car to travel around the state? Do you use a vehicle when you move to a new home?

If the answer to more than two of these questions is yes, then according to some people, you don’t qualify for the exclusive car-free bike-only club.

Of course, this isn’t a formal club. But that doesn’t mean people aren’t routinely excluded from it.

END_OF_DOCUMENT_TOKEN_TO_BE_REPLACED

Please join us in welcoming a new regular contributor to the site: Taz Loomans. Taz, a Portlander whose writing you may have seen on Atlantic Cities, Inhabitat or her own site BloomingRock.com, will be taking the delicious title of BikePortland’s subversiveness columnist. She’ll be approaching that from many angles, but we suggested she start things rolling with a bit about herself.
__

The world didn’t want me to bike. Biking was for men, for recreation, or for poor people, but definitely not a mode of transportation for a woman.

That is the message I got from my parents when I started to ride my bike in Phoenix. My dad was born and raised in Tanzania and my mom was raised in Mozambique. We are Muslim Indians by origin. Both my parents come from places where only poor people bike, and even then, women aren’t among them.