There is tension between goals of broad support, specificity in individual pricing, and privacy.

Last week Portland moved a step closer to putting an equitable price on driving and use of the right of way. Most often referred to as “congestion pricing,” the idea of charging for road use during peak hours, or in congested locations, has been used for decades in cities around the world—London, Singapore, Stockholm—but so far has not been widely adopted in the United States. In 2019, the Portland City Council directed the Bureau of Transportation (PBOT) and the Bureau of Planning and Sustainability (BPS) to explore pricing strategies, which led to the creation of the Pricing Options for Equitable Mobility (POEM) task force. After meeting for 18 months and being presented with expert technical information, the community task force published its final report which will be presented to City Council on October 13.

The report is impressive, and an excellent primer for anyone who would like to know more about the subject. It takes a broad look at numerous pricing options including prices on: parking; ride-hailing services such as Uber, Lyft and taxis; urban delivery services such as parcels and food; highway tolling; cordon or area pricing and road use or per-mile charges. 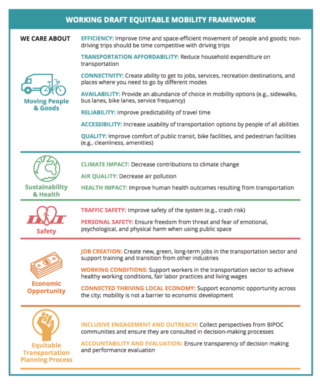 Following each pricing strategy is a “Highlights from Task Force discussion” section in which they analyze it according to their “Equitable Mobility Framework.” These discussion sections are the gems of the report and should be helpful to the City Council and bureaus. Rather than try to present a consensus position, the Highlights are divided into “promising opportunities” and “important considerations” sections which reveal the support, concerns, tensions and spitballing of the group as they worked through the various options. They have pre-chewed the food for Council, and presented the heart of any debates.

And there are tensions between the various aspirations. On one hand, the group notes “the urgent need for better demographic data on who drives and parks where in Portland.” On the other hand, “they felt privacy protections should be taken very seriously and be easy to understand.” One person’s data is another person’s privacy.

Among the Task Force goals are to “balance complexity with clarity” and to “build coalitions,” which to me argue for a “keep it simple stupid” approach. But that could possibly be at odds with, “the location of pricing infrastructure should be considered so it doesn’t overtly impact BIPOC or communities living on low incomes.” There is tension between goals of broad support, specificity in individual pricing, and privacy.

For those who want something done sooner rather than later, the report recommends pricing options which can be put in place within one to three years, without the city having to coordinate with outside entities. Most promising is a “flexible commuter benefits program” which stipulates that any employer subsidizing employee parking also must offer cash or alternative transportation payments to employees who do not drive to work. That is a no-brainer, and something that has been in place in other U.S. cities for years. Other suggestions include fees for privately-owned off-street parking, urban delivery, and for-hire transportation.

The report maintains a tone of urgency. 600,000 new residents are expected to live here by 2040 and “many of the problems we’re experiencing now—like worsening traffic, increased risk of crashes and rising carbon emissions—are due to get worse.” It is exciting to see Portland exploring these options. Mark your calendar for October 13th and stay tuned for more coverage of what is sure to be a robust debate.

Here we go again. Anther lengthy study filled with acronyms and doublespeak that will go nowhere. Prove me wrong.

Are you suggesting that something like congestion pricing (which I support) which strikes at the heart of the farcical American cosplay of “freedom” should be done without studies to back it up in the face of people who will want to stop it?

I would note time-of-day variable tolling happens in Seattle on the 520 bridge, and the 405 in the Seattle area has variable tolling based on demand. It’s a form of congestion pricing right here in the Northwest!

ODOT is planning to launch variable rate tolling on the I-205 Abernethy Bridge and then the full I-5 and I-205 corridors in the Portland metro area by 2025/26. https://www.oregon.gov/odot/tolling/Pages/default.aspx

Yes and they will use the toll money to expand the freeways thus undermining the benefits of pricing!

Regardless of what people claim, the money will go into the general fund and be spent on whatever (or into ODOT’s budget, which will then be reduced by a similar amount to the same end). What those funds will ultimately be used for is anyone’s guess.

(Likewise, measure 110 dedicated weed taxes to pay for drug treatment, leaving the legislature to find a way to backfill the school budget which had been partly funded by those pot revenues. 110 probably would have fared less well if backers had been honest using the school budget to pay for drug treatment, or even just paying for it from the general fund as it ultimately was.)

Section 3a. Use of revenue from taxes on motor vehicle use and fuel; legislative review of allocation of taxes between vehicle classes. (1) Except as provided in subsection (2) of this section, revenue from the following shall be used exclusively for the construction, reconstruction, improvement, repair, maintenance, operation and use of public highways, roads, streets and roadside rest areas in this state:
(a) Any tax levied on, with respect to, or measured by the storage, withdrawal, use, sale, distribution, importation or receipt of
motor vehicle fuel or any other product used for the propulsion of motor vehicles; and
(b) Any tax or excise levied on the ownership, operation or use of motor vehicles.

If the constitutional prohibition applies to congestion pricing (maybe it does), it will be put into ODOT’s budget. To the extent ODOT gets funding from the general fund, that amount can be reduced by the amount they got from tolling, and now an equivalent amount is available in the general fund.*

If the legislature wants to give some of that back to ODOT for highway widening, that is their prerogative.

*If ODOT is entirely self-funded, this mechanism will not work.

It looks pretty definitive to me:

“(b) Any tax or excise levied on the ownership, operation or use of motor vehicles.”

Watts has no clue what he’s talking about. Marijuana tax was allocated on via state wide ballet measure which the voters approved for a worthwhile cause. Local governments paying for schools with marijuana tax is a whole other can of worms not worthy of comparison in this context. The congestion pricing dollar’s absolutely should not go back to ODOT. All of it. I repeat all of it should got back to PBOT to address local neighborhood connectivity issues these freeways are responsible for. Resist ODOT claim on the money! Si se puede Hardesty! Bring it to Portland vote, I’m sure they would vote to keep the money.

Well, ODOT has publicly stated that tolling on I-205 is going to be used to pay for adding a third lane on I-205 – in fact they don’t have any other funding for it so need tolling. The state legislature has given them the ability to bond against future toll revenues for the big megaprojects (205, Rose Quarter, CRC, Boone’s Bridge, and unnamed “congestion relief” projects. That is clearly their intent.

Yep, that’s right. From the I-205 Toll Project website:

“The I-205 Toll Project will use variable-rate tolls on the Abernethy and Tualatin River Bridges to raise revenue to complete the I-205 Improvements Project and manage congestion.”

The project also includes bringing the Abernethy and Tualatin River bridges up to seismic standards. As for toll revenue from the Regional toll project: use of that revenue has not been decided. All that the OTC has said is that toll revenue will be used on the corridor that it is raised on. As for what “corridor” means, that, too, has not been decided. There are many years of decision-making ahead.

Chris I
Reply to  Watts

Ed
Reply to  Chris I

ODOT has put forth an RTP amendment explicitly saying toll revenue will pay for I-205 widening: https://www.oregonmetro.gov/news/public-notice-opportunity-comment-i-205-toll-project-amendment-regional-transportation-plan

HB 3055 (Section 65) explicitly gives ODOT the authority to use toll revenue as a way to bond for projects. https://olis.oregonlegislature.gov/liz/2021R1/Downloads/MeasureDocument/HB3055/Introduced

Finally, ODOT explains how toll revenues may be spent on page 2: https://www.oregon.gov/odot/tolling/Documents/2021_0428_TollProgram_FAQs_final%20(002).pdf

I suspect that we will see this “infrastructure” in Portland in the next 5-10 years. The wealthy demographic that can afford to purchase housing in Portland will make VOV lanes (VIP occupancy vehicle lanes) an irresistible revenue-generating mechanism for regional transportation agencies.

Posting late mostly because I find this post and the comments to be depressing.

1. Congestion pricing involves the assessment of fees upon entry into a congested area/neighborhood — almost always a prosperous urban center so that distributional effects are less regressive.

2. No group or org in Portland is proposing congestion pricing; rather, what is being proposed is nothing more than 1960s-era freeway tolling (with updated technology).

3. The only vaguely anti-autocentric aspect of current tolling proposals is the mostly online debate over whether tolling revenue should be spent on conventional road building/maintenance or transit/active transportation. Those who support tolling and spending revenue on less-autocentric infrastructure have very little political influence and; therefore, their support for tolling “redistribution” should be taken with a large grain of salt.

PS: Portland has a real knack for taking something that could be transformational (e.g. Vision Zero or Congestion pricing) and turning it into a rehash of the transportation status quo (e.g. the three Es or variable rate tolling, respectively).