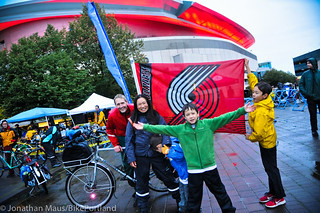 
Trail Blazers star: Biking is “My funnest time of the day”

“I remember being the type who would say ‘Get out of the road you bike rider’, but now every time I do something, it’s like ‘I’ll ride my bike over there.’ It’s definitely something I know I’m going to do for the rest of my life.”
— Brandon Roy to Oregonian reporter Jason Quick

OregonLive.com has published a video and several stories about the biking exploits of the Portland Trail Blazers’ NBA superstar Brandon Roy.

Roy, who earned Rookie of the Year honors in 2007 and is considered one of the NBA’s best players, has been incorporating a bicycle ride into his weekly workouts during the offseason.

He told the Oregonian’s Jason Quick that, “At first, I was like, wow, this isn’t fun,” but as he got used to the thigh-burning, he now thinks, “It’s probably my funnest time of the day… that’s the time I get to get away from everything.” END_OF_DOCUMENT_TOKEN_TO_BE_REPLACED

Bike to Blazers 2006 recap and photos

The first ever Bike to Blazers ride was a big success. About 30 or so brave souls ventured out on a stormy day and enjoyed a bright and sunny ride along the Esplanade from the Lucky Lab to the Rose Garden to watch a TrailBlazers game. We had three families join us and everyone had a good time.

At the arena, we were treated to indoor bike parking and free Zach Randolph bobble-head dolls (which were more popular than I expected). Jeff Bernards and a volunteer from the Livestrong Ride helped me staff a Bike Info table right near the main entrance. We gave away loads of free bike maps (thanks PDOT!), BTA brochures, and stickers.
END_OF_DOCUMENT_TOKEN_TO_BE_REPLACED

We’re set to have a great time Saturday night at the Bike to Blazers Ride. I just heard that we’ve sold about 40 tickets so far. That means we’ll not only have a fun group but it also means we’ve raised $200 for the Get Lit program! That money will make our streets safer for everyone by providing free lights for visibility-challenged cyclists.

There’s still plenty of time to buy tickets. The online ordering is closed, but our friend Lisa at the Blazers is standing by to take your order. Call her at (503) 963-3966 to get your tickets. Here’s a brief rundown of the ride…
END_OF_DOCUMENT_TOKEN_TO_BE_REPLACED

Bike to Blazers flyer and update

I know the Blazers aren’t exactly everyone’s favorite team these days…but a bike party is a bike party, and that’s exactly what we’ve got shaping up with the first-ever Bike to Blazers Night Ride. According to the always helpful Lisa B. over at Blazers Headquarters, we’ve already sold over 30 tickets (get yours here)!

Since $5 from each ticket ($15 each) goes to the Get Lit program, that means we’ve already raised $150 to keep our streets safe and buy lights for cyclists in need (and, rumor has it that Get Lit might expand into helmets too).
END_OF_DOCUMENT_TOKEN_TO_BE_REPLACED

Bike to Blazers in the Willy Week

You might have seen the Bike to Blazers Night Ride in the Willamette Week. If not, I’ve scanned it for your viewing pleasure. They even made up a nifty little bike graphic to go with it.

Unfortunately they left out contact information and they included a few facts about the ride that I want to clarify:
END_OF_DOCUMENT_TOKEN_TO_BE_REPLACED

Announcing the first-ever Bike to Blazers Night Ride! On Saturday, April 15th join your friends, family and neighbors for a night ride to the Rose Garden to watch the Portland Trailblazers battle the Golden State Warriors. Here’s the lowdown:

There’s a mechanic in clac county who always has cars blocking the bike lane I know they’re not supposed to, but who do I contact about it? thanks 2 posts - 2 participants Read… Read Post »