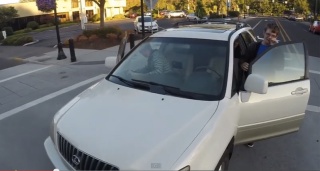 Collisions between bike riders and car drivers are not uncommon. What is uncommon however, is the level of civility displayed by reader Ben Koker after he was thrown to the ground following a slow-speed collision with a man driving a Lexus SUV earlier this month.

Thankfully, Koker was not seriously hurt. And he also happened to capture the entire incident on video thanks to his helmet-mounted camera.

The collision happened in the intersection of Main Street and 10th in downtown Oregon City. Koker was heading southbound on Main toward the four-way stop at 10th. After stopping and thinking it was safe to go, Koker was hit by the SUV driver from his right. The driver failed to stop at the stop sign.