Update: A candlelight vigil for Gordon Patterson will be held at 8pm on Thursday, September 17th at Hudson’s Bay High School (map). 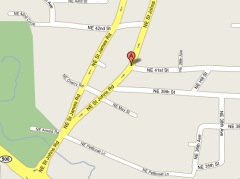 A teacher at Hudson’s Bay High School in Vancouver, Washington was killed in a hit and run yesterday around 4pm while riding his bicycle through the intersection of Saint Johns and NE 41st St in Vancouver.

The Columbian is reporting that the victim was Gordon Patterson, 60, a well-liked technology teacher at the high school.

Eighteen year old Antonio Eugene Cellestine has been arrested and booked on felony hit and run charges at the Clark County jail.