State of the City – The Conversation 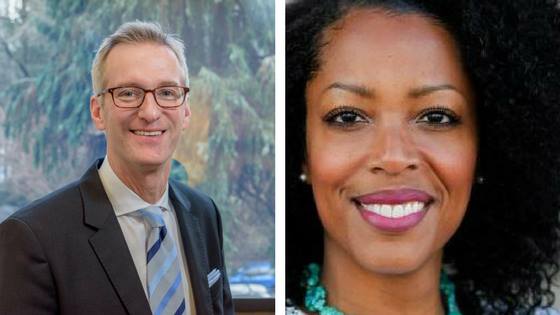 Join us as we sit down with Mayor Wheeler to dig into the details of his State of the City address and open the floor to questions.

If you’d like to attend the State of the City address the day before, you can register here: https://www.pdxcityclub.org/calendar/?eid=8784.

This event is sponsored by the Portland Business Alliance.

About Mayor Wheeler
Ted Wheeler previously served as the Chair of Multnomah County and Oregon State Treasurer. He began his term as Portland Mayor on January 1, 2017.

A sixth-generation Oregonian, Ted was born in Portland, and graduated from Lincoln High School. Ted earned his undergraduate degree in Economics from Stanford University, an MBA from Columbia University and a Masters in Public Policy from the John F. Kennedy School of Government at Harvard University.

About the Interviewer
Rukaiyah Adams is the Chief Investment Officer at Meyer Memorial Trust. She is responsible for leading all investment activities to ensure the long-term financial strength of the organization. Before joining Meyer, she ran the $6.5 Billion capital markets fund at The Standard. Ms. Adams is also the Chair of the Oregon Investment Council, the board that manages approximately $90 Billion for the State of Oregon and PERS.

Ms. Adams holds a BA with academic distinction from Carleton College and a JD from Stanford Law where she was on the Law and Policy Review and the Co-President of the Law Student Association. Ms. Adams also has an MBA from the Stanford Graduate School of Business.