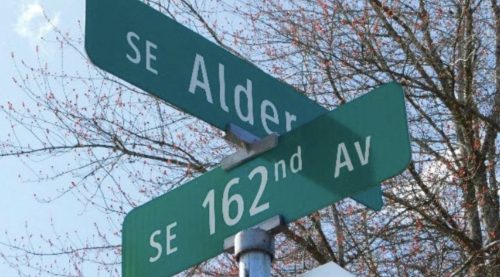 We at The Rosewood Initiative are excited to be working with Portland Bureau of Transportation to make SE 162nd between SE Alder and SE Powell Blvd safer for all users including cyclists, pedestrians, and transit users. To learn more about what will be coming, we invite you to an open house that we are hosting at The Rosewood Initiative community center, 16126 SE Stark St. Portland OR 97233 April 29th, 2019. The event is from 5:00 pm to 7 pm, and you can drop in any time.

SE 162nd was built long before all of the housing we see now existed. As the neighborhood becomes more dense, more people are using it for more than driving, and this will increase with the new bus line, and after Portland completes the improvements on Parklane Park.

– 11 people were injured while walking

– 5 people were injured while biking

– 8 people were seriously injured while in a vehicle

It is not a high crash corridor yet, these projects will help to make sure it doesn’t become one.

Many improvements are needed on SE 162nd. More lighting is needed due to it being on one side right now. Mid-block crossings are needed to easily and safely cross the street to get to the bus and save having to walk way out of direction. Speeds are still very fast and need to be lowered. Finally, changes to the cross-section is needed so that drivers will not be induced to drive fast and recklessly as happens often on our streets.

For more information, or to get involved, contact Kem Marks, Dir. of Transportation Equity at kem@rosewoodinitiative.org