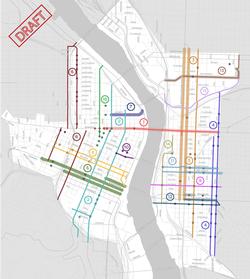 Portland’s Central City is growing. Already home to the densest concentration of people and jobs in Oregon, our Central City is expected to have an additional 51,000 new jobs and 38,000 new households by 2035. We can’t make Central City streets wider, but we can retool them to be more efficient.

The Central City in Motion project is PBOT’s effort to facilitate all the new trips this growth will bring. Building off the Central City 2035 plan, the project will provide a roadmap for the next 5-10 years of investments in bus lanes, low stress and protected bikeways, and safer crossings. In June, thousands of Portlanders weighed in on a host of proposed bus lanes, bike lanes, and pedestrian crossings at www.CentralCityinMotion.com. Come learn what we’ve heard to date, which projects are rising to the top, and how to get involved.

Bring your questions and bring your lunch!