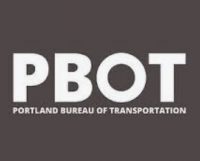 City of Portland news releases about new projects and policies, posted here for your convenience (and because the PBOT website is not great).

Construction begins today at the intersection of NW 23rd Avenue and Vaughn Street and U.S. Highway 30 as part of the NW 20th Avenue Local Improvement District which will reconnect the Slabtown neighborhood and Northwest Portland by extending NW 20th Avenue and NW Thurman Street.

The new intersection geometry is designed to accommodate a WB-67 design vehicle (a 53’ semi truck and trailer). The existing design does not fully accommodate those large vehicles. Other intersection changes include creating a turn lane for northbound traffic from NW 23rd Avenue heading onto the U.S. 30 ramp toward I-405 and reconfiguring the two eastbound travel lanes on NW Vaughn St to one thru lane and one right turn only lane. All of these changes will improve safety as well as help traffic flow much better through the intersection and improve transit operations for TriMet buses – frequent service line 15 as well as lines 24 and 77 travel through this intersection.

Construction starts today, Friday, July 12, and will be completed by August 13. During construction, at least one thru lane in each direction will be kept open for use. During morning and evening rush hour, before 9:00 a.m. and after 4:00 p.m., all lanes at the intersection will be open.

The traveling public is advised to expect delays while repairs are being made. We ask the public to travel cautiously, observe all lane closures and directions by reader boards and flaggers, and use alternate routes if possible. Learn what you can expect in our work zones and how you can help everyone stay safe by watching this video:

The project paves the way for build out of the Con-way Master Plan, unlocking more than $500 million in mixed-use housing development for an area comprised mostly of surface parking lots adjacent to St. Patrick’s Catholic Church, the oldest Catholic Church in the Portland area.

Property owners XPO, Esco and Cairn Pacific own a half-dozen city blocks surrounding NW Thurman and 19th Avenue. They are paying a combined $7.6 million for the street improvements, which give the properties more development potential. They worked with PBOT to form a Local Improvement District to organize the funding needed for the improvements.

PBOT is contributing $1 million in system development charges, which are fees paid by developers to help offset the impact of population growth on the transportation system. The Bureau of Environmental Services is investing about $1 million for sewer construction, which will be coordinated with road construction so the roads don’t have to be torn up twice.

Corpac Construction won the contract to build the road improvements. The project has 82 percent participation of MWESB contracting, more than double the city’s goal for contracting with minority-owned, women-owned and emerging small businesses.

PBOT’s Local Improvement District program works with property owners of all sizes, all across Portland, to build new roads, streetcar lines, drainage improvements and other transportation infrastructure that improve quality of life, the economy and transportation access.

Learn more about the project at https://www.portlandoregon.gov/transportation/article/540587

Note: This is part of a larger project on Tillamook that we covered back in February.

Speed bumps are scheduled for construction on NE Tillamook on July 9 and July 10 between NE 16th and 28th. The road will be closed to through traffic with local access only during construction. The schedule may change due to weather or unforeseen circumstances. The project website will be updated with information about changes to the schedule.

Please do not bike through the construction zone – use NE Hancock or NE Thompson, or walk your bike on the sidewalk.

Speedbumps are included in this project because vehicle speeds on Tillamook are currently higher than the speeds recommended by the operational performance guidelines set by Portland’s Neighborhood Greenway Assessment Report. We are also including speed bumps in this project because we will be turning stop signs on Tillamook to favor the greenway. While turning the stop signs allows people walking and biking to travel more efficiently along the greenway, it can also attract people to drive on the greenway. The speed bumps help discourage driving on the greenway.

Please visit our project webpage for more information about the Tillamook Neighborhood Greenway Enhancement Project] and be in touch if you have any questions.

(Publisher’s Note: This is an official news release from the City of Portland Bureau of Transportation republish here for your convenience. Feedback? Contact Jonathan Maus)