Jonathan is on a well-earned family vacation. He may cover this in more depth later.

Photo of Samuel Chiriac from his gofundme memorial.

There was a traffic violence fatality on Mt. Scott over the holiday- Samuel Chiriac, 16, was a passenger in a car being driven by Seba Pop, 17. Seba Pop was driving in a three-car caravan, and “passed one of his friends in the oncoming lane and missed a sharp turn, driving off of the roadway and crashing. Dense fog may have played a factor in the crash.” (source: Portland Police)

This was a half mile away from where Karla DeBaillie was killed in August by Mary Dieter while DeBaillie was on a bicycle.
END_OF_DOCUMENT_TOKEN_TO_BE_REPLACED

What would bike-friendly auto parking reform look like? Seven ideas As the City of Portland continues public meetings with its two massive parking reform committees, most attention has been on parking prices: how much permits and meters should cost and how the money should be spent.

But another issue has, so far, mostly escaped notice: The many ways that parking spaces can conflict with biking improvements.

END_OF_DOCUMENT_TOKEN_TO_BE_REPLACED 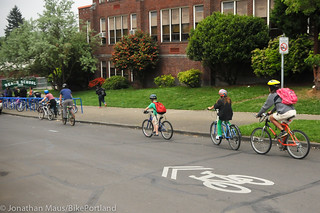 Making sure school investments are fairly
distributed is a big part of PBOT’s equity strategy.
(Photo by J. Maus/BikePortland)

The Portland Bureau of Transportation has taken a major step toward being a more inclusive agency with the announcement today that they’re recruiting for a new position: Equity and Inclusion Manager.

The agency will pay over $107,000 for the right “change agent” they hope will fill a “high profile within the Bureau,” and, “make decisions impacting all areas and functions” of the 750 person bureau.

Equity is a major initiative not just within PBOT but across city bureaus. The Portland Police Bureau hired their first-ever equity and diversity manager just last month. City initiative or not, PBOT has focused on equity for many years now and the effort has found new life as a priority for Director Leah Treat.
END_OF_DOCUMENT_TOKEN_TO_BE_REPLACED

You’re not as visible on a bike at night as you think, new study shows Not as flashy as most
people think.
(Photo © J. Maus/BikePortland)

People who ride bikes at night consistently overestimate their visibility to other road users, a new study has found.

They also overlook a few tricks, like reflective strips around the ankles and knees, that can help the most.

The report, led by Joanne Wood of the Queensland University of Technology in Australia and published in next month’s issue of Accident Analysis & Prevention, asked both regular and occasional bike riders wearing black clothing, fluorescent or reflective vests, and vests with reflective strips to estimate the point at which an approaching driver would be able to spot them. Different lighting setups were used, too.

People wearing black clothing on their bike at night, or just a reflective vest, were far too optimistic. They thought drivers would see them from nearly twice the distance drivers actually tend to. END_OF_DOCUMENT_TOKEN_TO_BE_REPLACED Interestingly, a bike sales tax is not a foreign concept here in Oregon. In fact, it has been supported in the past by the Bicycle Transportation Alliance, Metro, PBOT Bicycle Coordinator Roger Geller, and even Oregon Congressman Earl Blumenauer.
END_OF_DOCUMENT_TOKEN_TO_BE_REPLACED