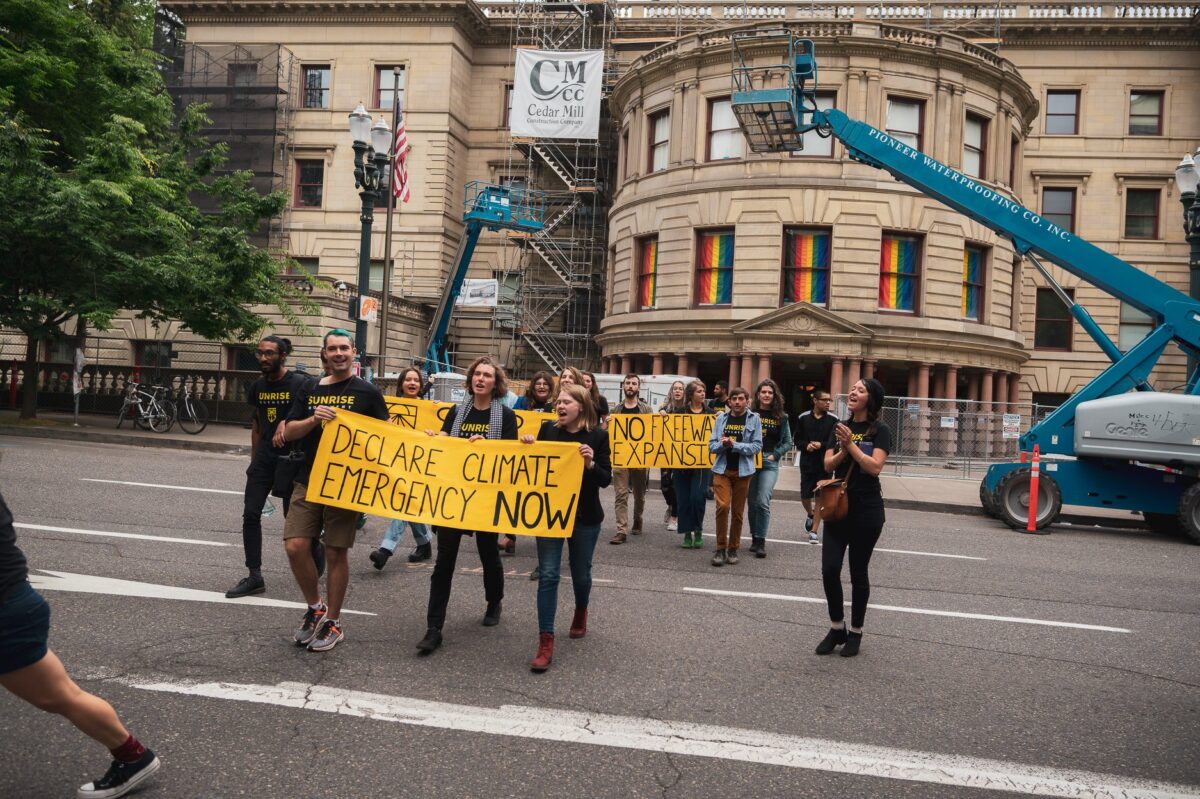 Led by Extinction Rebellion PDX and 350PDX, activists called on Mayor Ted Wheeler to declare a citywide climate emergency. In addition to a creative and colorful rally that took over the street, activists from Sunrise Movement staged a sit-in in Wheeler’s office.


As we reported when Sunrise volunteers showed up at a Metro transportation funding hearing last month, the inclusion of the I-5 expansion project at today’s rally is just the latest evolution in the ever-closer integration between transportation reform activism and the rising climate change movement.

Here’s the statement released by Sunrise PDX a few minutes ago:

It is far past time for words without meaningful action. We are tired of hearing about “environmental protection” in the abstract, while new projects are being built to facilitate the continued expansion of fossil fuel usage. The time is now to act boldly; to break cleanly from the status quo; to take the political risks necessary to secure the future of our planet and its inhabitants. To Mayor Wheeler and the City of Portland, we ask:

What is your plan?

We stand in opposition to the local expansion of fossil-fuel infrastructure and call on our city officials to do the same.
Today, we sat in Mayor Ted Wheeler’s office in Portland, Oregon to demand that his administration:

1. Declare a climate emergency in the City of Portland.

2. Stop the current expansion of the Zenith Energy crude oil export terminal and develop a plan to shut it down entirely.

3. Prevent the proposed expansion of the I-5 freeway and any future freeway expansion projects within the City of Portland.

Note: This post was recreated after people involved in the original story were being harassed online. I uploaded a different version of the story with a new URL to break the links being shared on social media and I have also changed the images so that individual identities cannot be made out. Another result of this was that the 40 or so comments on the original post are no longer available.

Amazing what people do when they believe they’re anonymous and the person of their ire is just a screen name. Similar to what an anonymous driver may do to ‘just another vehicle’?

btw, thank you for covering this story!

Vote Up0Vote Down
« Oregon’s Idaho Stop bill needs your help – this weekend! – to get over the finish line
Bicycle rider dies in collision on SE Flavel – UPDATED »