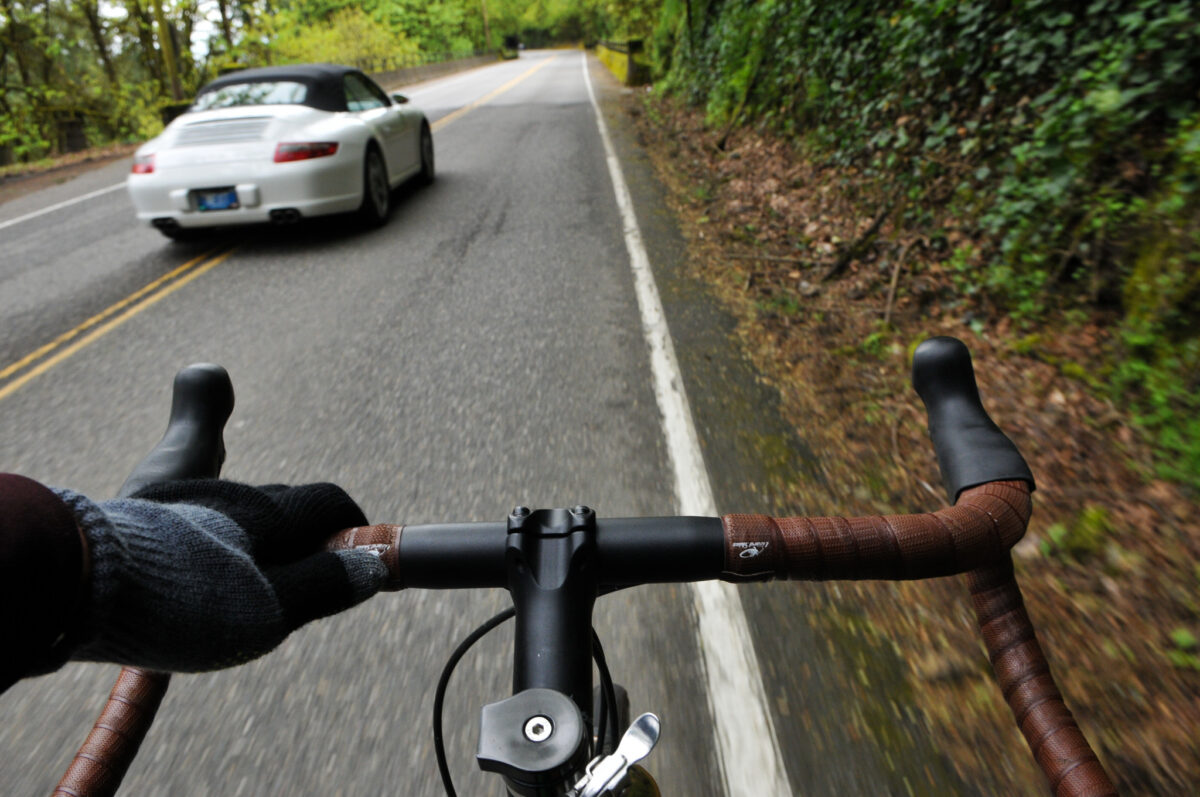 Roads like NW Skyline Blvd and Cornell are on the list for wider paved shoulders and other measures aimed at making cycling safer.
(Photos: Jonathan Maus/BikePortland)

It just so happens that many of the roads managed by Multnomah County are vital links in the cycling network: Sauvie Island Road, Larch Mountain Road, Skyline Road, Cornell, Marine Drive, Historic Columbia River Highway, and so on.

We don’t talk about them as much as urban infrastructure and commuting routes, but that makes them no less important. And now, as part of an update to their 20-Year Road Capital Improvement Plan (CIP), the County needs to hear from you how to prioritize future projects and funding. An online open house is now available and comments can be made through March 4th.

The good news is, the County has already heard loud and clear that safety in general — and especially conditions for people on foot and on bikes — should be the top priority. In a recent survey, over half of all comments received mentioned bicycling and walking. When asked roads with “problem spots,” 56 different roads were mentioned. Skyline Boulevard was at the top with 38 mentions. The County summarized concerns on Skyline as it being, “Too narrow for motor and non-motor users to safely mix. Speeds too high. Poor sight lines at intersections.” All of those concerns are directly related to cycling safety. Cornell Road, another popular biking route that heads into the hills directly from downtown Portland, was also mentioned as being too narrow for bicycle and car users to safely mix.

When given a list of 15 priorities and asked which ones the County should focus on, “preventing collisions” received the most support. It was followed very closely by “Make it safer to walk and bike.” At the bottom of the list? “Increase capacity” (see above).

And what’s even more interesting about the feedback the County has heard thus far is that out of over 200 respondents at open houses is that 123 of them said their primary mode of transportation is a car.

To make bicycling safer on their roads, current projects on the CIP list would take a variety of steps including: widen and pave shoulders where possible, build uphill climbing lanes, create more pullouts to improve passing safety, and even full-length bike lanes where none currently exist.

Here are just a few examples of projects listed on the CIP that have significant cycling elements:

Hurlburt Road: Historic Columbia River Highway – Littlepaige Road (Project 131R)
Provide separation for bicycles where warranted and/or feasible on SE Hurlburt Road between Historic Columbia River Highway and SE Littlepaige Road. Improvements could include narrow shoulders (3-4 feet) to full width shoulders (6 feet) in one or both directions or could include minimal improvements such as uphill bicycle climbing lanes or intermittent bicycle pull outs. Solutions can be used for pedestrian use (i.e., shoulders).

Springville Road (Project 170R)
Provide safety improvements on NW Springville Road between the City of Portland limits and the Washington County line such as augmenting shoulders in a context-sensitive manner and providing shoulder bikeways. Project must also be consistent with on-street bike/ped option in the Westside Trail Master Plan.

Cornell Rd (Project 113R)
For NW Cornell Road, provide separation for bicycles where warranted and/or feasible. Improvements could include narrow shoulders (3-4 feet) to full width shoulders (6 feet) in one or both directions or could include minimal improvements such as uphill bicycle climbing lanes or intermittent bicycle pull outs. Solutions can be used for pedestrian use (i.e., shoulders).

I strongly recommend taking a few minutes to go through the online open house to help the County understand why these projects are important to you. Deadline for input is March 4th!