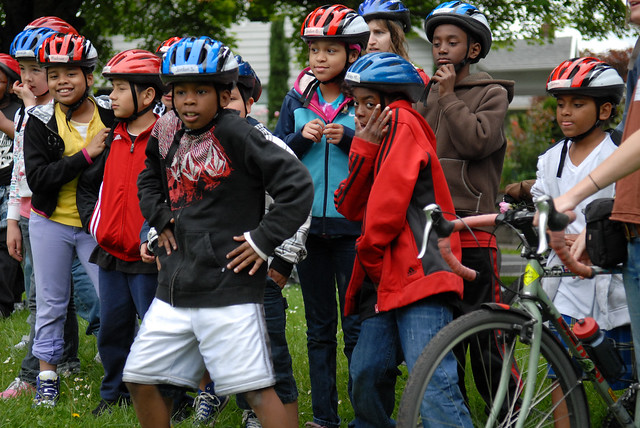 A Safe Routes to School ride in Portland in 2010. A new BTA campaign suggests tapping federal funding allocated to the Metro regional government to offer the program in suburban schools, too.
(Photo: J.Maus/BikePortland)

Second in a week-long series about the BTA’s five new advocacy campaigns.

Over the last two years, people trying to reverse the spectacular 40-year slide in the number of kids who bike and walk to school have come to a gradual realization: dedicated federal funding for the Safe Routes to School program is probably gone for good.

“Safe Routes,” as it’s often known for short, paid for in-school walking education workshops for 2nd and 3rd graders, biking education classes for 4th and 5th graders and safety infrastructure like crosswalks and traffic signals near elementary and middle schools.

“Safe Routes [to School] funding is gone, but the basis that was laid over the past 10 years prior to that has really helped show people how effective it can be.”
— Kari Schlosshauer, Pacific Northwest Regional Policy Manager for the Safe Routes National Partnership

But the 2012 federal transportation bill pulled dedicated funding, instead letting states and regions decide whether or not to continue the program using their federal allocations.

In Portland, the program has been so popular that the city and Portland Public Schools began paying for it in 2006 using their own money. This month, a coalition of advocates including the Bicycle Transportation Alliance launched a charge for Metro to use federal funds to do the same thing across the region.

“Safe Routes funding is gone, but the basis that was laid over the past 10 years prior to that has really helped show people how effective it can be,” said Kari Schlosshauer, Pacific Northwest Regional Policy Manager for the Safe Routes National Partnership. “It’s a great time for it. it seems like there’s a lot of desire from it around the region that I’ve seen.”

The strategy, in a nutshell, is to rally suburban families and school districts to convince the Metro regional government that every school deserves the programs that many Portland elementary schoolers already get.

“Gresham’s a great example of a community where there’s a groundswell of interest and support for Safe Routes to Schools among school district personnel, community members, partners,” BTA Deputy Director Stephanie Noll said in an interview. “Folks working in the schools are on board. The one thing that’s missing is funding.”

If it’s to be found, the BTA says that funding would come the place some of the federal money landed after Congress abandoned Safe Routes: in the Metro regional government’s regional flexible fund allocation.

The goal is for $2 million to $11 million every two years, out of a total regional flexible funding pot of $90 million to $120 million.

BTA Advocacy Director Gerik Kransky said the organization hopes to secure that money without forfeiting any of the regional flexible funds that Metro already dedicates to active transportation.

“There’s plenty of room for a $2 to $11 million allocation to safer routes to schools for our kids all across the region without reducing the amount of money we are currently investing in bicycle, pedestrian and transit capital projects,” Krasky said.

Kransky said he sees Safe Routes as a way to build political support for active transportation — sort of nascent American version of the successful “Stop de Kindermoord” movement that kicked off the Dutch embrace of bicycle infrastructure in the 1970s.

“They don’t just serve our schools,” she said. “They make our neighborhoods safer for everyone. But it really makes sense to start with our most vulnerable community members.” Where the idea comes from: The BTA coordinates Oregon’s Walk + Bike Network, a forum for interested parents, school officials and faculty and other advocates for better student transportation. The concept of metro-level funding developed from their conversations.

Obstacles: Advocates will need to win votes, probably some time in the next year, at JPACT, a Metro committee dominated by suburban politicians, and the regional Metro council.

Likely tradeoffs: Regional flexible funds are in stiff demand because they’re flexible. In the last few years, both TriMet and freight interests have grabbed some of them despite the comparatively small size of the funding stream. To get dedicated Safe Routes funding, it’ll probably need to be perceived not as “more stuff for the bike people” but as a way to support schools and education.

How you could help: Contact BTA Safe Routes to Schools advocate LeeAnne Ferguson: (503) 226-0676 x26 or leeanne@btaoregon.org. Sign the BTA’s petition to Metro. Attend the Safe Routes coalition meeting at 2 p.m. this Thursday, Aug. 28, at Woodstock Library.

Check back each day this week for another post in our series about new advocacy campaigns.

Murican Safe Route to School:
() all children must be driven everywhere
() ridicule all non-automobile forms of travel
() present strawman arguments portraying all human powered active travel as frivolous recreational activities that can’t be taken seriously
() act confused as to why America has the highest diabetes and heart disease medical costs in the world.

But all bikers run red lights and don’t wear helments! I know so because I saw one the other day and he represents all people who have ever ridden bicycle in the history of the world.

“My friend’s cousin’s ex-boyfriend’s kid got knocked off his bike when he was entering his high school parking lot; someone threw a glass bottle at him and he fell over in the grass. Can’t you see? It’s too dangerous to allow cyclists to bike to school. “

Why not get funding for the program from the very demographic that causes routes to school to be unsafe in the first place? Enforce existing laws and derive revenue from the people who flout them, putting our communities at risk and causing issues like this in the first place.

Charge $1 per car pulling through the school drive-thru.

Maybe it should be justified like the FCC’s Universal Connectivity Fee but in reverse.

Instead of a charge for more rural access it would be a charge for every minute your automobile is driving at walking/jogging speed. It would be a relatively small per minute fee so occasionally getting stuck behind a crash isn’t punishing but a conscious decision to drive in to a heavy traffic region, at a heavy time or not rerouting around a major construction zone is a daily fee charging for poor transportation choices.

The designated objectives of Safe Routes to School are excellent, as is their effect on enhancing both safety and livability of neighborhoods where the program has been used.

It being a grass roots program that welcomes and relies on active help from the neighbors themselves is exactly the kind of thing that more readily can have people be interested in having their neighborhood made better for walking and biking.