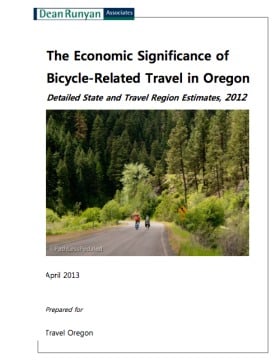 Here are a few more of the key figures:

And a few graphs: 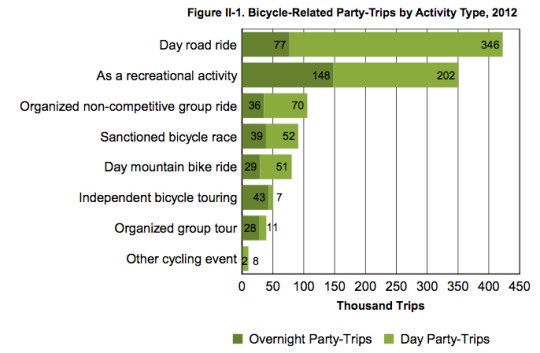 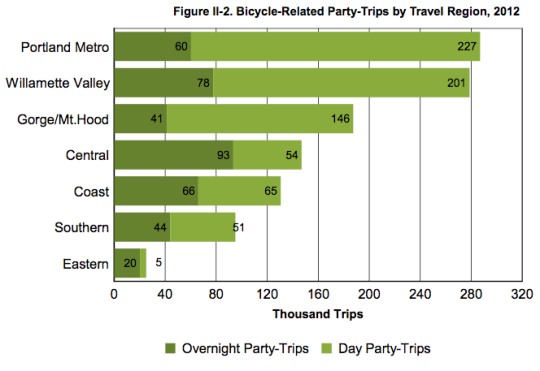 This detailed, 55-page study will prove invaluable to advocates, the media, and policy-makers. As The Oregonian reported yesterday, “Cycling’s not just hip and healthy; it’s becoming big business in Oregon.”

One key reason for the ascension of bike tourism in Oregon are initiatives like the nation’s first State Scenic Bikeway program. Yesterday, Oregon Parks and Recreation Department (OPRD) announced two more bikeways — Tualatin Valley and Madras Mountain Views — to bring the total number of specially designated bike routes throughout the state to 11.

Here’s more about each route from OPRD:

The Tualatin Valley Scenic Bikeway features the best of the northern Willamette Valley, from friendly downtowns to fertile farmlands and lush natural areas. Set in the heart of Washington County, the Bikeway covers more than 50 miles one-way, and includes the Banks-Vernonia State Trail.

Detailed maps, cue sheets, and information on accommodations and amenities along both routes are available at RideOregonRide.com.

Read more articles on this tip via our bike tourism page.

Great report! As always, the comments to the Oregonlive story are priceless.

Wow, those Oregon live comments are head shaking, I knew I shouldn’t have looked.

Overall, very cool. But no cycle tourists who are trans or genderqueer? I find that hard to believe. Also, disappointing to see that more was spent in auto fuel than bike events, repairs and gear together.

Speaking of Travel Oregon, they had an ad on TV last night about cycling in Oregon.

As usual, the bike haters are well represented on the O’s website.

Three years ago I rode the Great Allegany Passage (GAP) trail from Pittsburgh to Cumberland. There communities proudly proclaimed they were “a GAP Trail Community” on signs along the trail. The number of casual cyclists (no helmet, no Lycra, rented bikes) was astounding. It was apparent the businesses recognized cycling’s benefit.

I’ll wager that even when Oregon tourism cycling becomes a $2 billion contribution, the O’s haters won’t back off.

I am a Seattle resident who makes frequent trips to Portland with my family to ride bikes. For the longest time, I thought we were the only ones because whenever we check into one of our regular hotels, we are often greeted by the front desk with some variation of “Hey, it’s the bicycle family! Welcome back.” Apparently, though, we are not the only ones. That’s awesome.

Portland is a really attractive place to visit for leisure cycling because of its varied and well-connected infrastructure, bike culture, nice weather (compared to Seattle) and (if I’m being honest) great restaurants. It’s a place where you feel safe cycling with kids, which is not the case in Seattle.

Visiting Portland gave me a completely new perspective on my home city. It turned me into an amateur advocate for cycling up here because I have seen first-hand, from Portland’s example, how cycling infrastructure could one day make my city a better place.