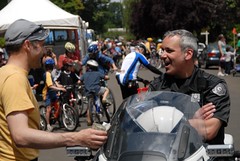 It may not feel like it outside, but summer is fast approaching and the City of Portland Office of Transportation is busy putting the pieces together for their second annual Sunday Parkways events.

Last year, the city held one Sunday Parkways event in North Portland. The 6+ mile route was held on residential streets and thousands of Portlanders enjoyed a “temporary park” free from motorized traffic. This year, plans are to hold three events throughout the city.

Routes for two of those three events have been finalized. Here is the map for the North Portland edition to be held on June 21st: 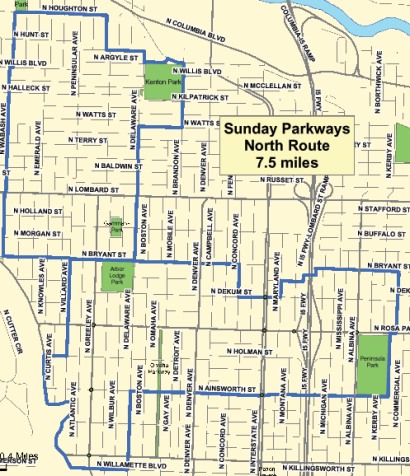 Sunday Parkways in NE Portland will be held on July 19th. Here’s the route: 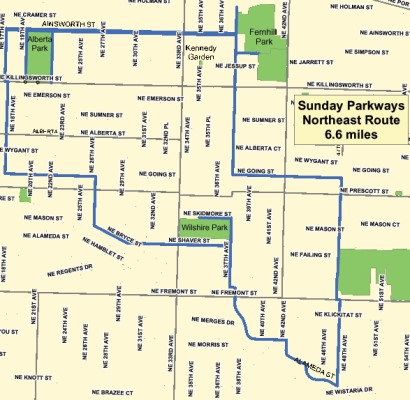 The SE Portland edition of Sunday Parkways will be held on August 16th. Route details are not finalized, but the city’s website says it will be an 8-mile route with two loops, including one loop that will climb to the top of Mt. Tabor.

In addition to route details, PBOT is hosting a series of “Cafe” events being held to “evoke collaborative and interactive conversation” about the events. The Cafe for the North Portland event was held earlier this month in Kenton. The next Cafe will be held on March 21st, from 9-11 a.m. at Redeemer Lutheran Church (5431 NE 20th).

With a budget crisis hanging over their department, PBOT is also stepping up their efforts to receive donations to help support Sunday Parkways. Back in December we shared how they were seeking corporate sponsorship for the event. PBOT is also making a push for individual donations. On their website right now they’re advertising an opportunity to “get in on the ground floor of a sustaining Portland tradition”. Anyone who contributes $40 or more will get a special edition Sunday Parkways bandana.

Learn more about Sunday Parkways — including ways you can get involved as a volunteer — at the PBOT website.

Excited to see the SE route

Hi everybody, we are still working on our website for people to be able to sign-up as a volunteer and to donate.

Please check back next week. Thanks for helping us make this a great event.

My baby is due 6/23…wouldn’t that be a fun addition to the North Portland festivities?! I’ll either be there waddling along in the street or nursing in the shade while everyone else bikes by. Thanks Options for the great work and the fantastic addition to what makes Portland a great place to raise a family!

Good grief. Even with three PDX S-Parkways, about the only way to top Santa at last year’s SP is doing just ONE in Tulsa.

I had a terrific time at last year’s Parkway and am thrilled that this year’s route come even closer to my house.

However, my excitement last year was tempered a bit by the vast number of police officers serving as traffic monitors, whose presence led me to wonder just how much this “free” day cost the city in overtime.

A $40 optional donation to run the event doesn’t seem sustainable. I think that the city should go the corporate route, or use federal stimulus money to pay for day laborers, or just put up a bunch of orange cones and hope for the best.

The SE one is on August 16th. Same day as the Portland Century, so I am out.

Wow – looks like summer’s filling up! There’s just not enough weekends to handle all the fun stuff – the 11th Annual Recumbent Retreat at Ft. Stevens is on that third weekend in August.

Anybody with ideas on cloning – clue us in!

LC you hit the lynchpin. In order to keep our streets safe from cars we have to pay cops.

maybe this will sound like bitter grapes coming form me, but I feel like just about anyone in a brightly colored vest could do about as good a job as I saw them doing last year.

That is, unless I am unfamiliar with the training that is required to be a crossing guard these days.

Yeah! I am so glad to see this program expanding. Riding the loop last year (twice!) is one of the happiest memories of my neighborhood.

Two section of Ainsworth closed totaling a full two miles overall? I’m impressed. Will there still be parked cars on that section of NE Ainsworth? I think it would be amazing to have that stretch finally cleared and opened just for non-motorized traffic.